Airbus, part of the large Airbus Group of aviation concerns, delivered their ten thousandth (that’s right – 10,000) aircraft on October 14, 2016. Founded on December 18, 1970, the company (originally known as Airbus Industrie) began with its focus on commercial airliners. It has since expanded into corporate jet versions of their airliners, military aircraft, helicopters, and the field of spacecraft. Initially, the company focused on a new, twin-aisle, medium-ranged airliner, named the A300. Fast forward to today; it has marketed and produced seven major commercial designs, with numerous variants of each. Airbus has branched out from its original base of Europe (France, Germany, Spain, and the United Kingdom) to many other countries, including large presences in China, the U.S., the Middle East, Japan and India too.

On Friday, October 14, 2016 Singapore Airlines accepted the aforementioned new A350-900, the youngest airliner model in the Airbus portfolio. This is the airline’s sixth A350 out of sixty-seven on order. According to the manufacturer, “Singapore Airlines placed its first order with Airbus in 1979 and over the years the carrier and its subsidiaries have ordered every successive model produced by the manufacturer.” Singapore Airlines is just one of more than four hundred airlines who’ve received Airbus aircraft since it delivered its first A300 to Air France on May 10, 1974.

Here’s a look at the various Airbus models that have been produced – some with their production ended, others with their orders just beginning to be tallied. 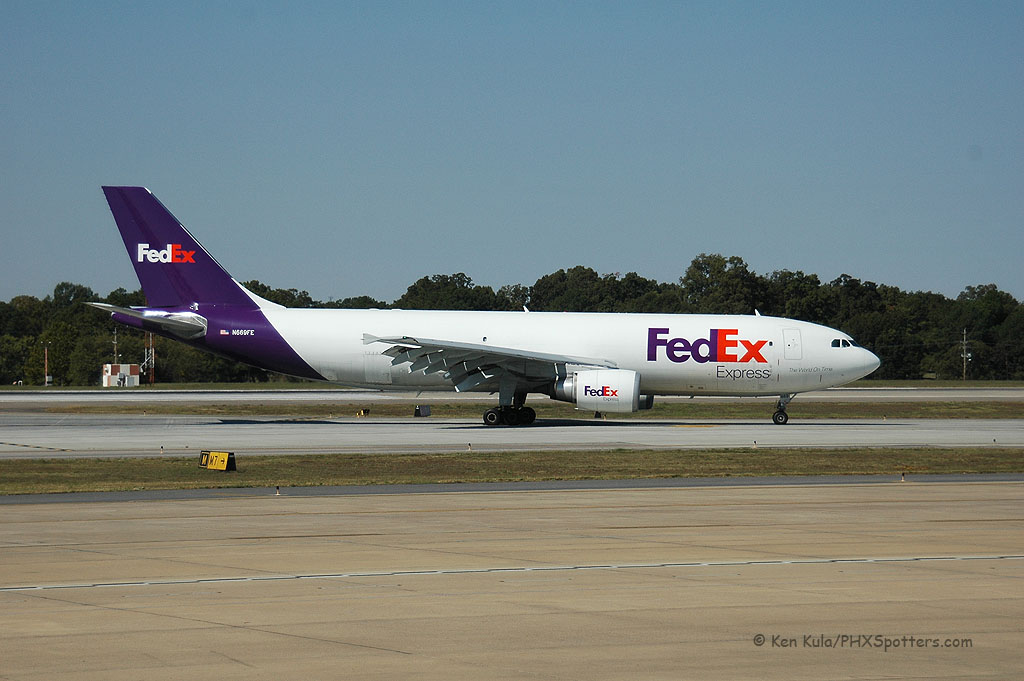 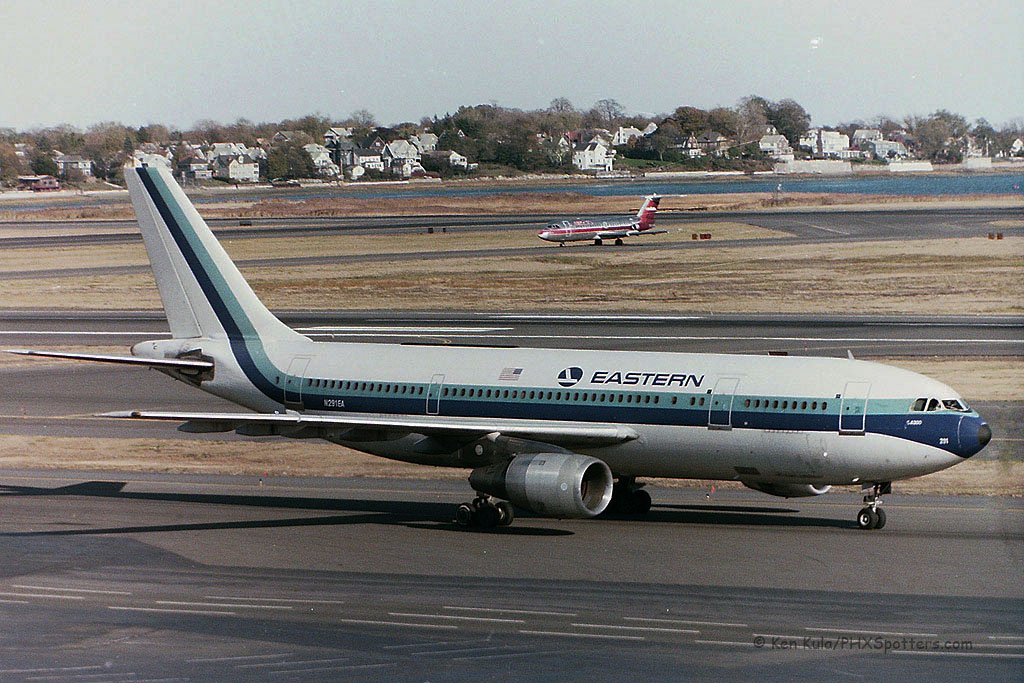 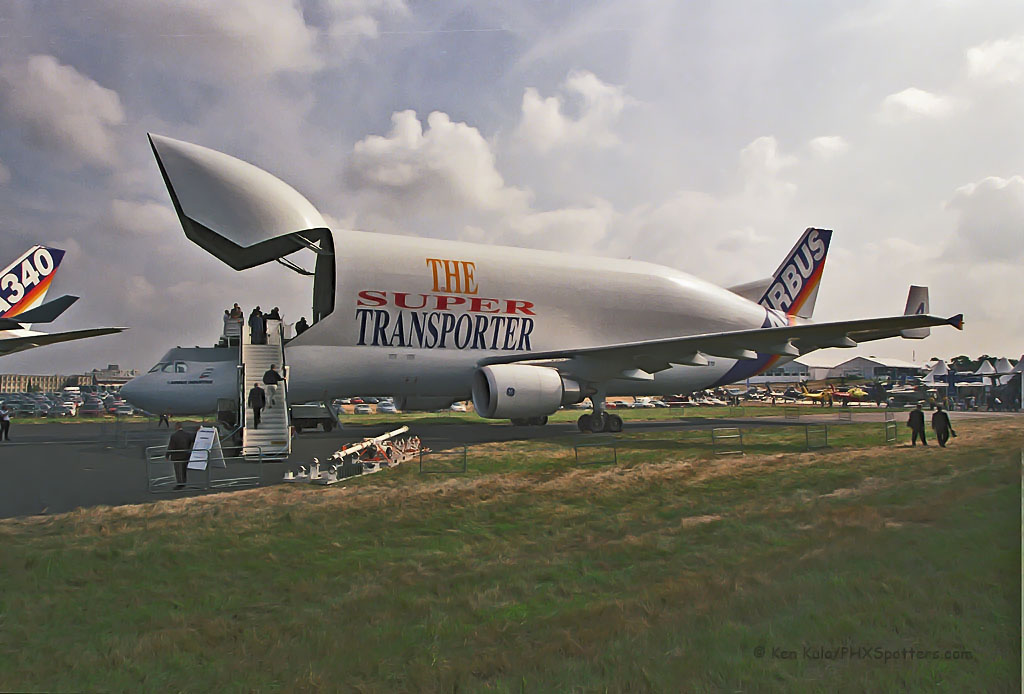 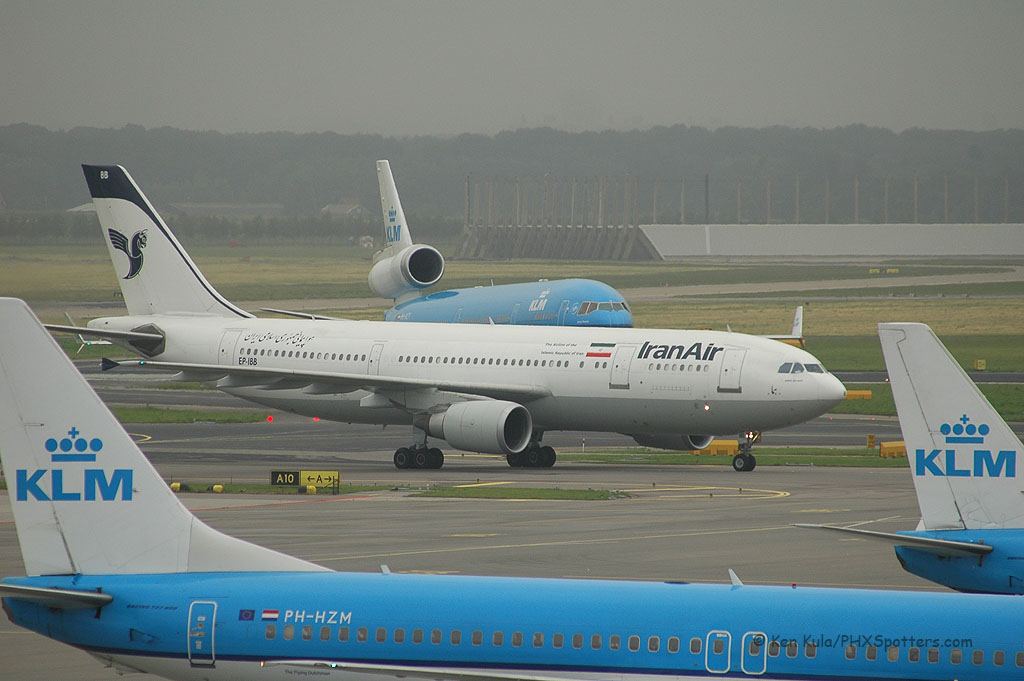 A300 First flight of the original A300B1 version was in 1972, with service entrance in 1974. The twin aisle, wide body twin jet was billed as medium ranged, although later versions (namely the -600R series) had longer endurance. An air freight version was produced, and many aftermarket conversions of passenger airframes into freighters occurred too. An oversized cargo variant was produced to allow Airbus to transport some of their narrow body subassemblies between manufacturing plants, this is known as the A300-600ST Super Transporter, nicknamed the “Beluga”. Five were built, based on the A300-600 airframe. A total of five hundred sixty one were built; production ended in 2007. 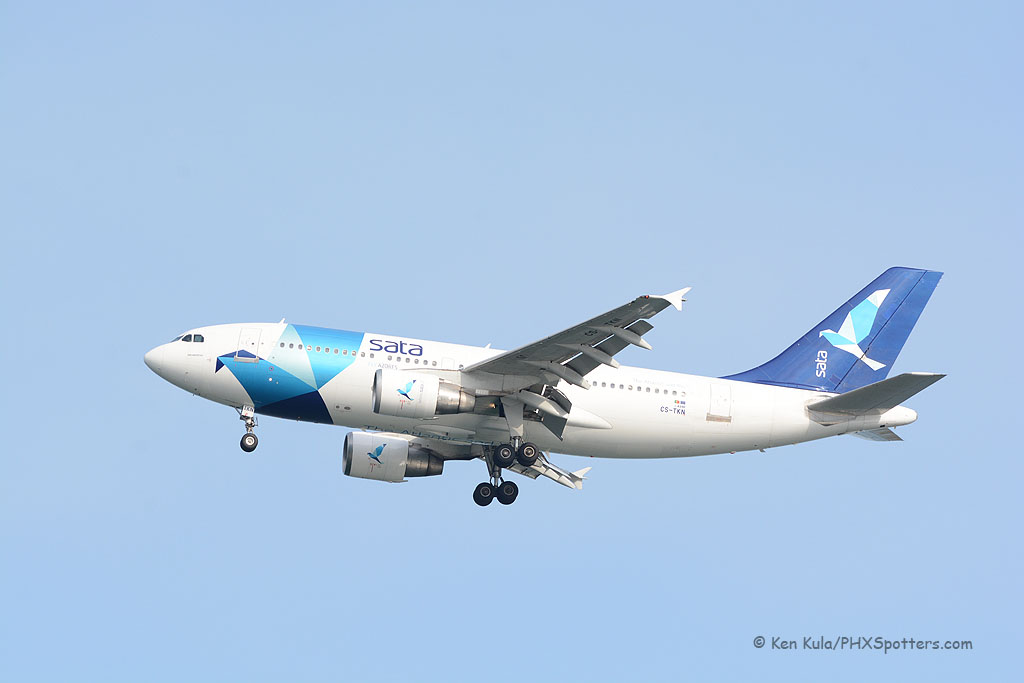 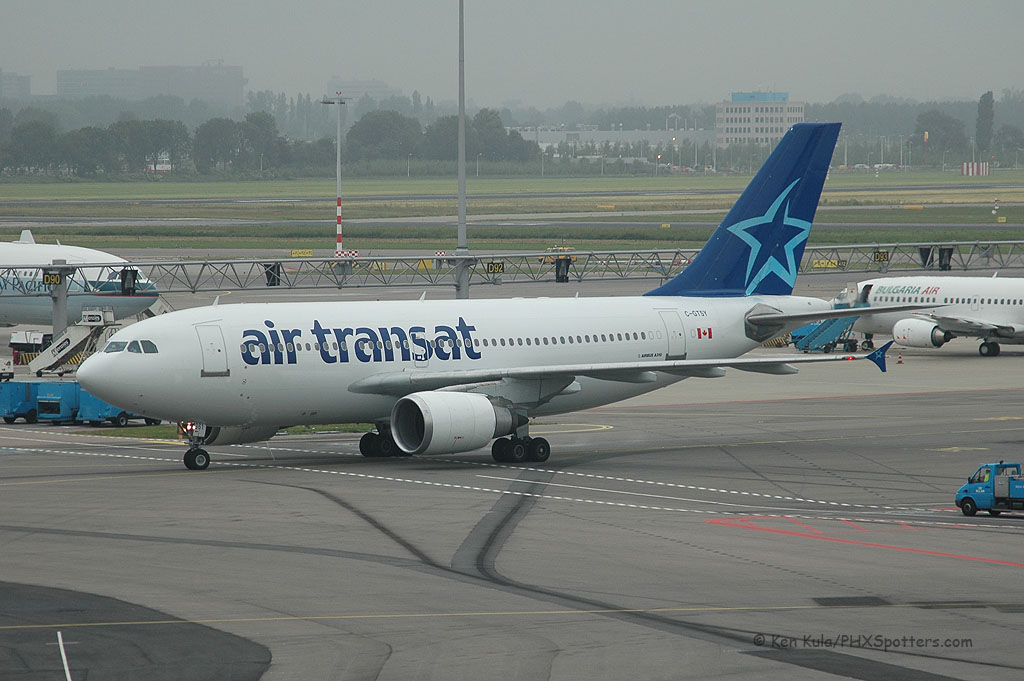 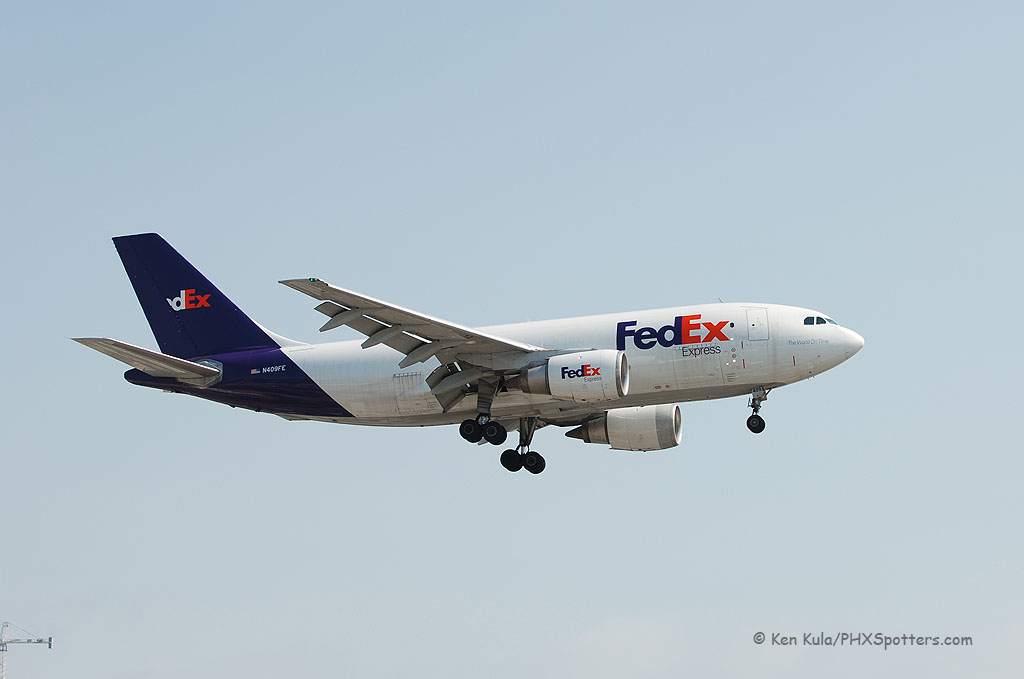 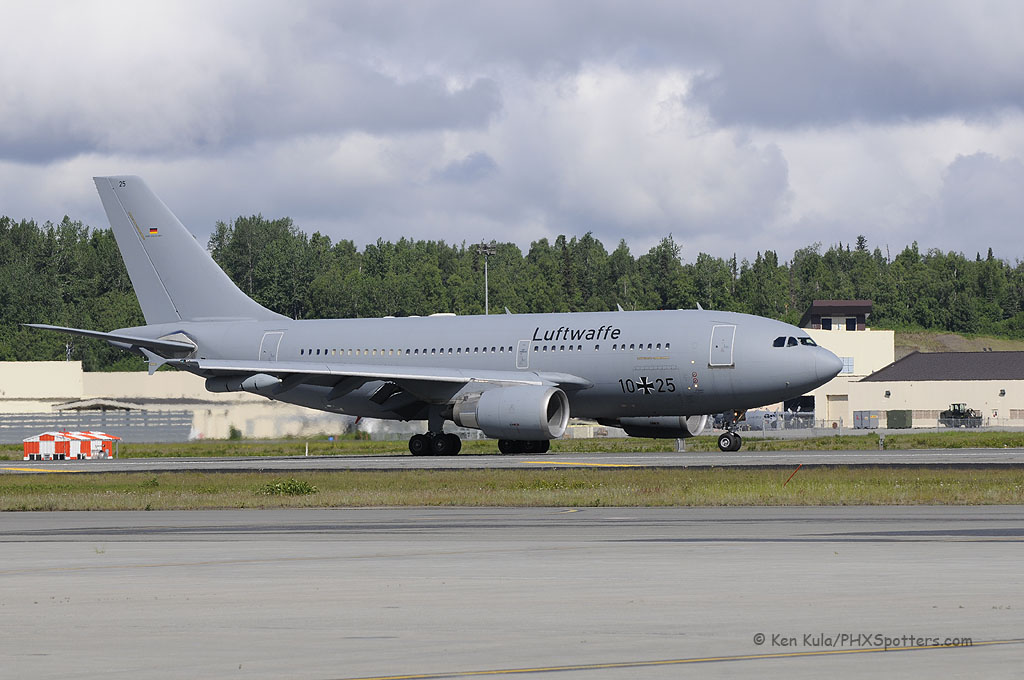 A310 A smaller derivative of the A300 was produced for fifteen years, called the A310. The second airliner produced by Airbus, it was intended as a second medium ranged airliner with a smaller, more economically feasible capacity. A -300 version was built as a longer-ranged intercontinental wide body, and along with the Boeing B-767, forged many new ETOPS routes across the Atlantic Ocean. Although a freighter version was marketed, no orders were filled… although many passenger versions were remanufactured later in their lives as freighters. Production ended in 2007, after two hundred fifty five airframes were produced. A handful of A310s were configured as Multi-Role Tanker/Transports (MRTT) for the Luftwaffe and Royal Canadian Air Force (as the CC-150 Polaris). 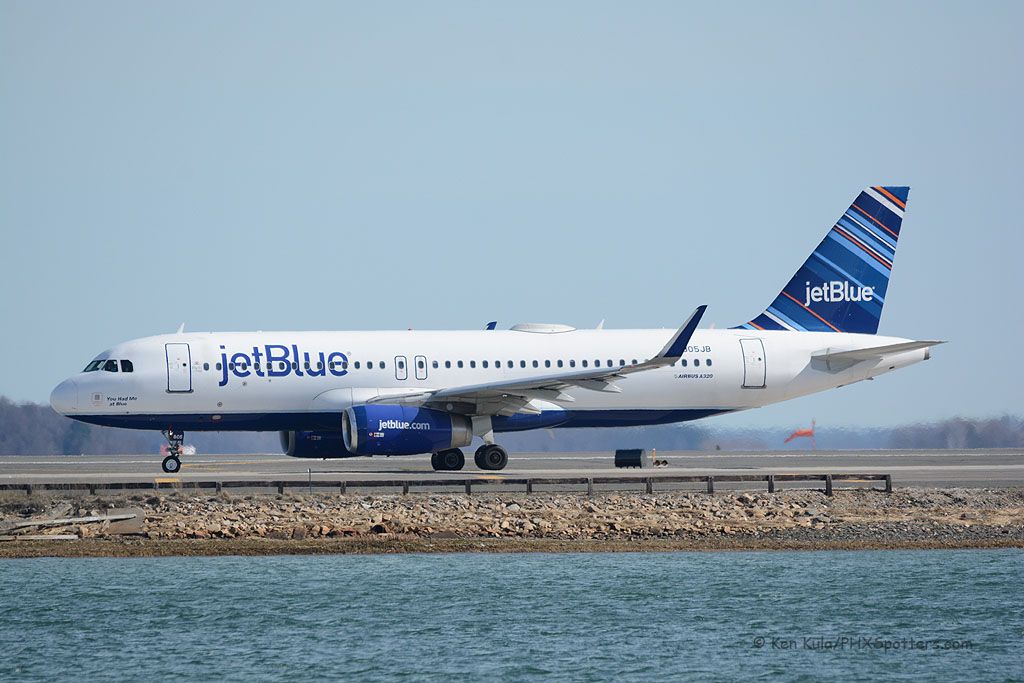 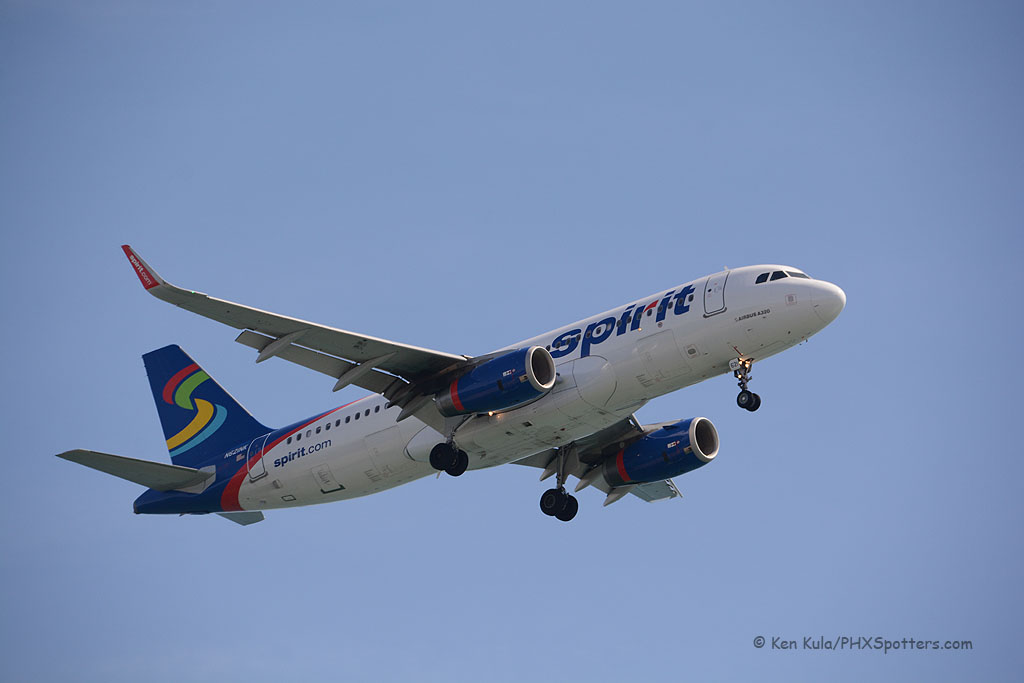 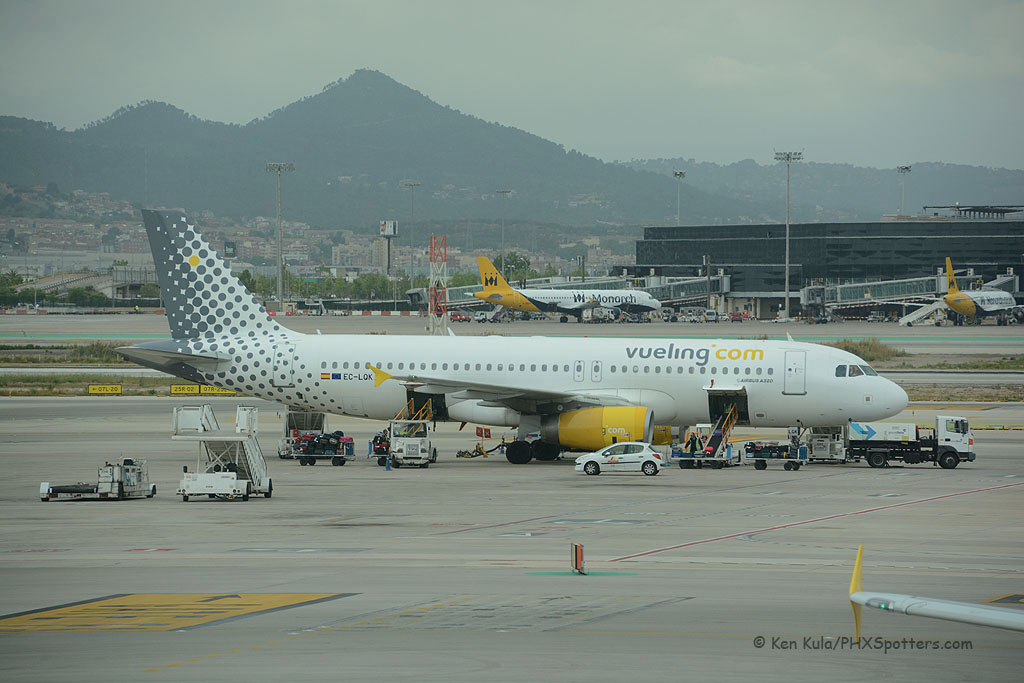 A320 Airbus designed a one hundred fifty passenger airliner, with one aisle and two engines, to compete against Boeing’s B-737 and to offer a more economical transport within European markets. Controlled by the first fly-by-wire flight control system in an airliner, the A320 sits in the middle of three ranges of defined airliner markets – from a one hundred twenty seat version to a one hundred eighty seat version. First flight was on February 22, 1987, and the first A-320 entered service slightly more than a year later with Air France. Upgrades include “Sharklets”, which are a set of fuel saving winglets, and the newest A320neo (New Engine Option) offering, which was launched in 2014 and has just entered service in 2016. The –neo versions have much improved operating economy and amenities. 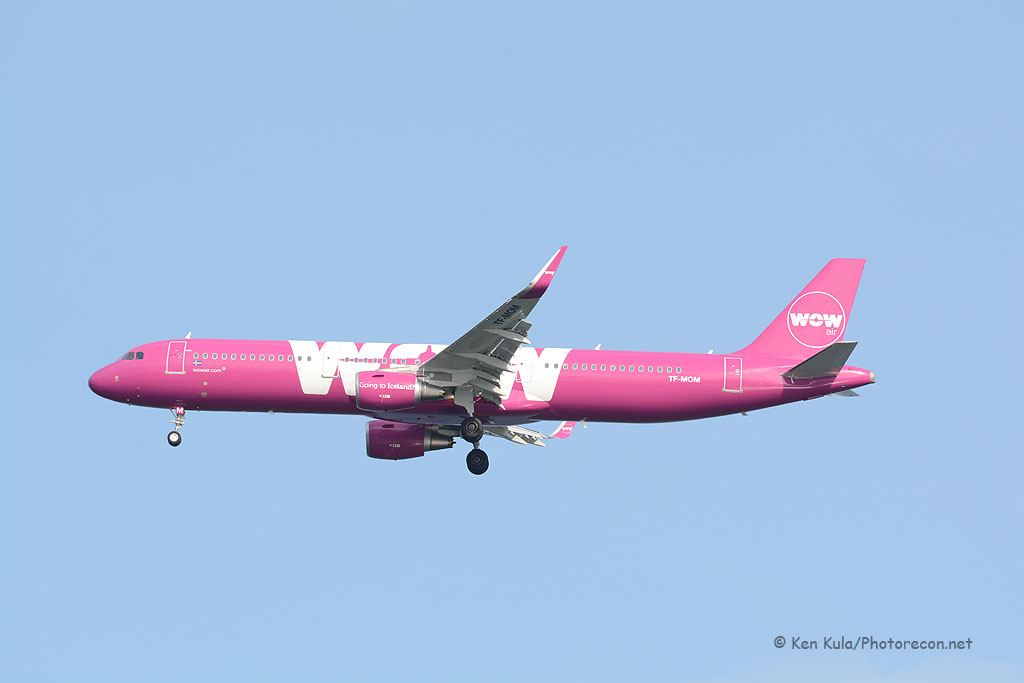 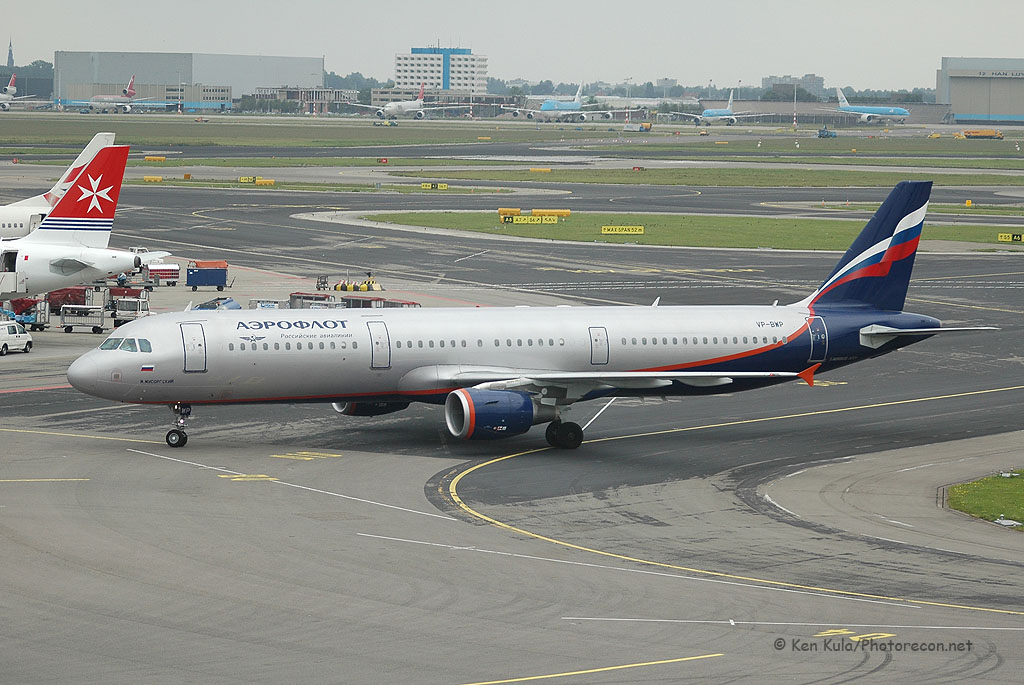 A321 The first change to the basic A320 airframe became the A321, a stretched version of the midsized narrow body airliner. The first flight of this type occurred on March 11, 1993, and entered into service the following year. The initial version offered a medium range, but the later -200 version has true intercontinental range, and is in use on some routes in between Europe and the U.S.. Improvements to the original A321 include adding Sharklets, and an A321neo version is in production too. A319 Slightly smaller than its A320 parent, the A319 first flew in 1995. It shares a common type rating for pilots with the A320, making it economically attractive for airlines to own more than one variant of the A320 family to fit their traffic needs. A new A319neo version is being fielded, with orders already coming in. A318 Part of the A320 family, this single aisle short to medium range transport is the smallest Airbus airliner, and saw less interest than other Airbus variants. Only eighty air frames were built, the first initially taking to the air on January 15, 2002. A few are configured as Corporate Jet (ACJ) versions. 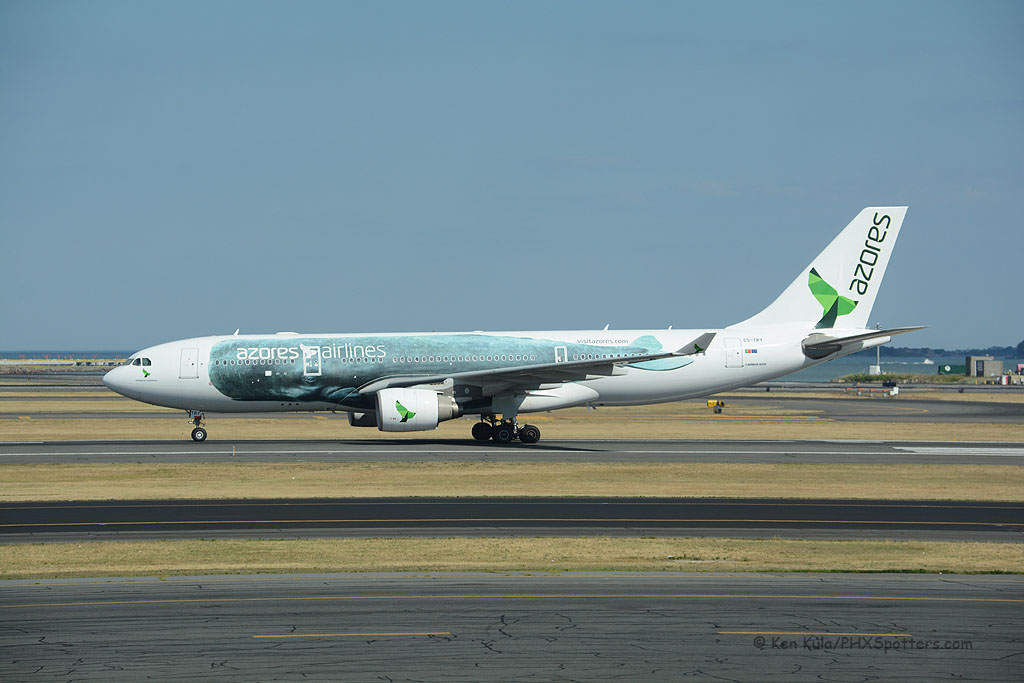 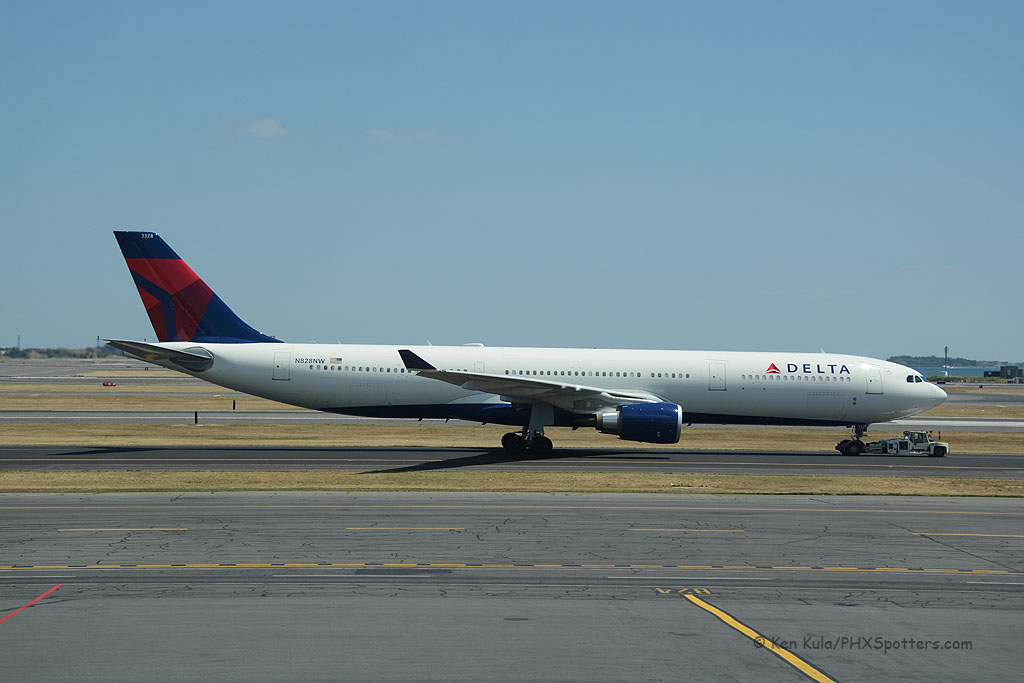 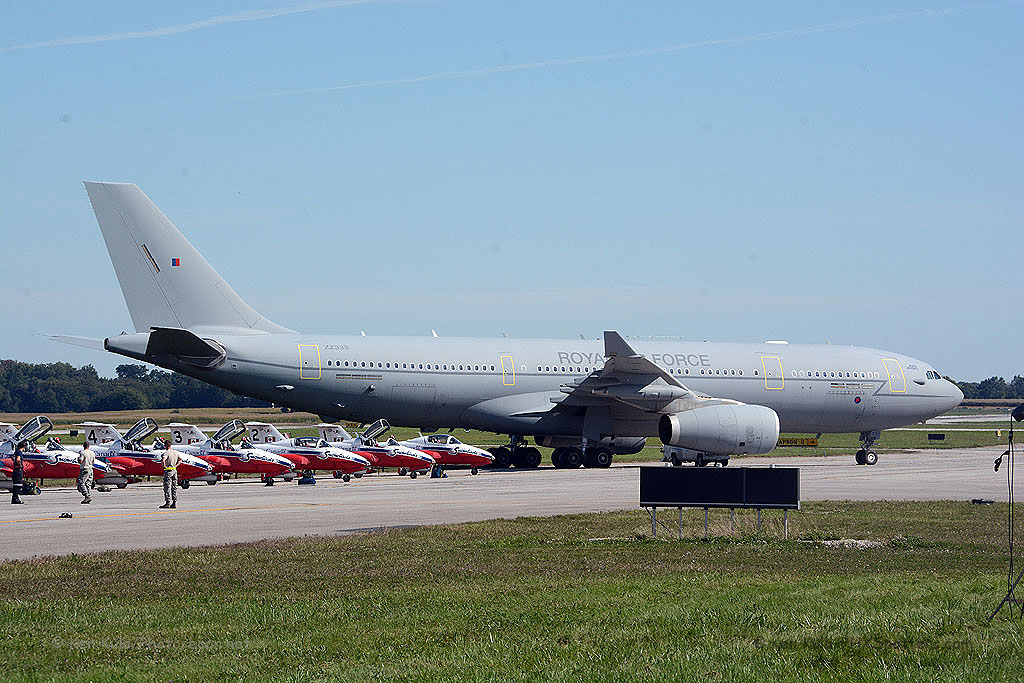 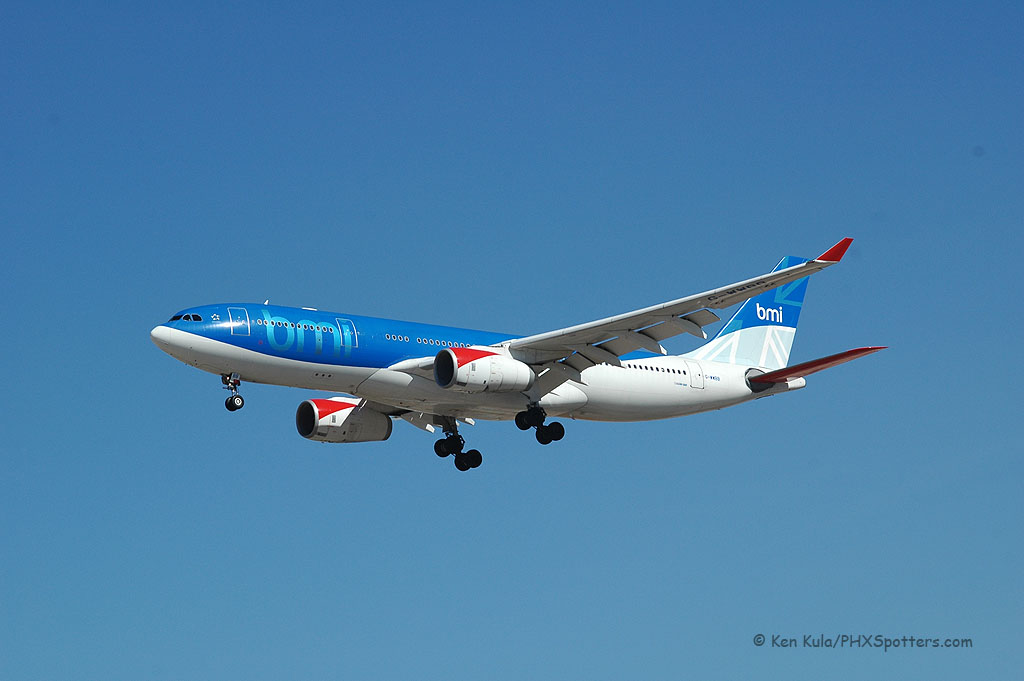 A330 A medium to long ranged wide body, configured with two aisles and longer range than an A310, it first flew in November, 1992. Slightly confusing, the first variant is the larger -300 version; a smaller -200 has been built too. This design replaced the A310 – and the A330 series itself will receive engine upgrades, as the A330neo. Well over one thousand four hundred of these jets have been ordered. A freighter version has been advertised, and versions have attracted the attention of military users too. Forty-nine militarized A330s, known as either KC-30As or A330MRTTs, have been ordered by eight nations. At one point, the KC-45A version of the A330 was chosen by the U.S. Air Force as their next generation tanker/transport, but has since lost the order during a competition review. A new Beluga XL version, based upon the A330, will supplement and then take over the original A300–600ST oversized cargo operations of today. 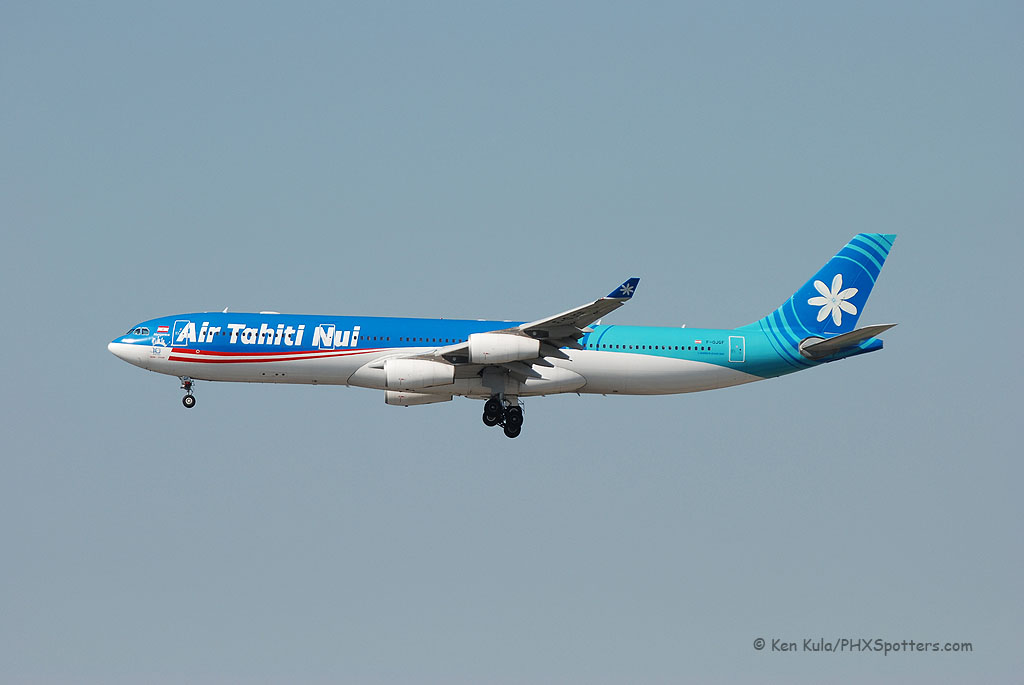 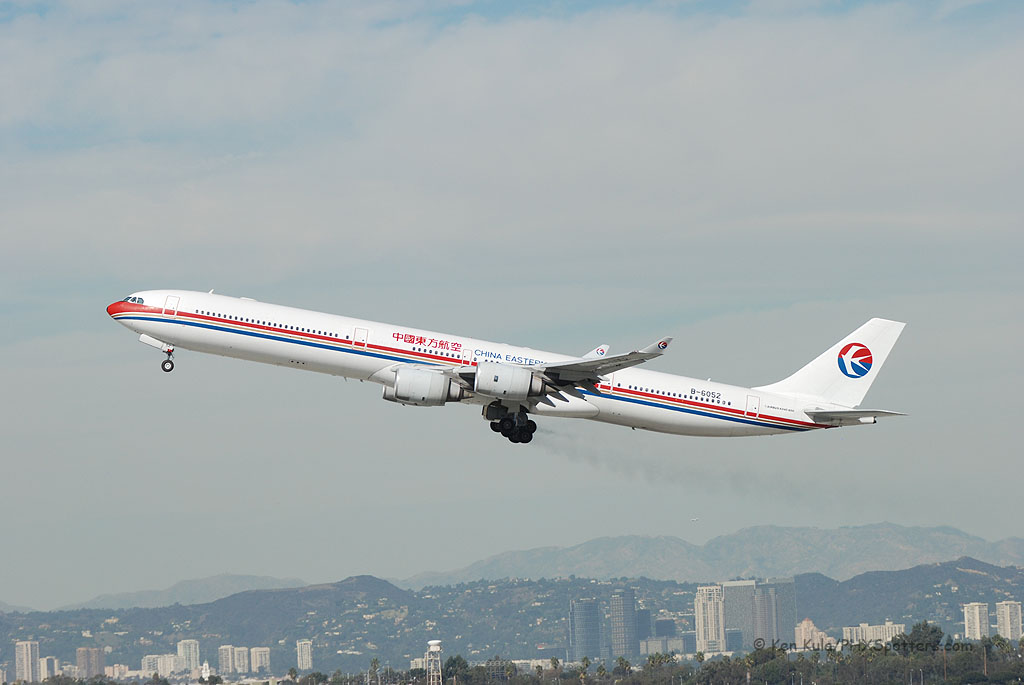 A340 A long range transport that shares the fuselage and wings of the twin jet A330, this four engine long and super-long ranged wide body transport first flew in October, 1991. Although four different sized versions have been produced, they can be distilled into the -300 and -200 standard-length version, and the -600 and -500 extended length variants. The A-340-500 was the longest ranged commercial jetliner in the world up until a recent Boeing design topped its 8,650 nautical mile range. Production ended for the aircraft model in 2011, after three hundred seventy seven were built. A350 The newest addition of Airbus’ family of long ranged, wide body airliners is the A350 XWB (Extra Wide Body). The type first flew on June 14, 2013, and was introduced to service some nineteen months later. The current -900 version will be joined by a trio of follow-on versions, the -900 ULR (Ultra Long Range) with an additional four hours of flying endurance over the original version. The -1000 version will be the longest of the versions, replacing the A340 series, and the smaller -800 version will replace smaller A330s. 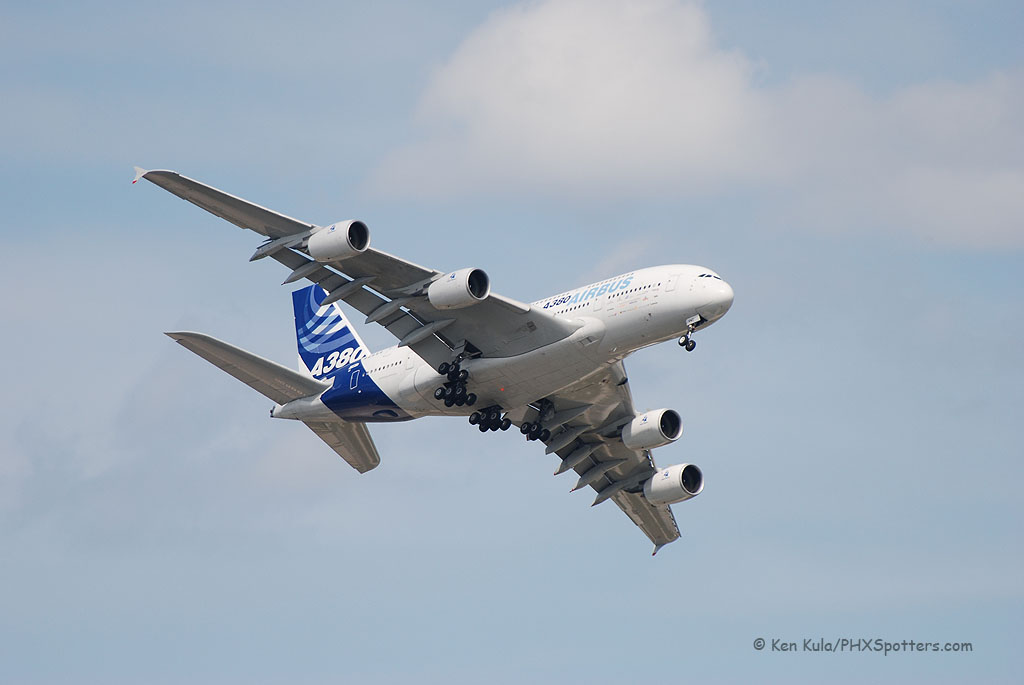 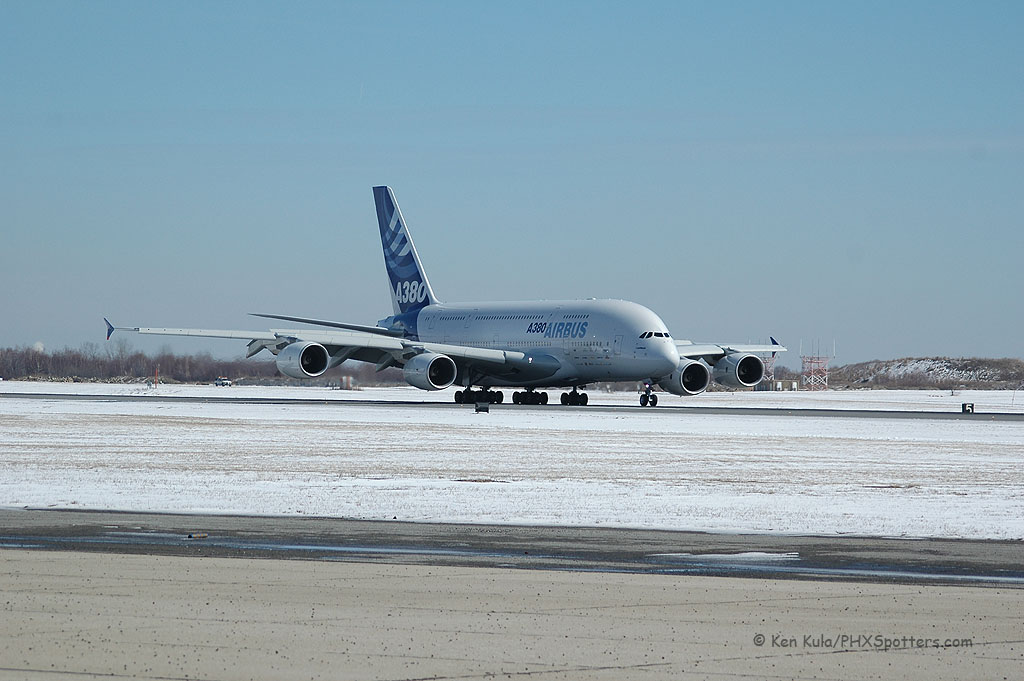 A380 The Super Jumbo attracted much attention when it was announced in 1990, and even more when it first flew on October 27, 2005. Its first service flight occurred on October 25, 2007. The double decked aircraft can be opulently furnished, with routing seating for around five hundred or so passengers, although it is certified to carry an astounding 853 passengers in one-class seating. No operator has come close to the latter amount, so far! Orders stood at three hundred nineteen as of the summer of 2016, but a freighter version has been put on hold. The A380 has an exceptionally long range too, as it routinely operates Qantas’ eight thousand five hundred seventy seven mile route between Sydney International Airport and Dallas Fort Worth International Airport.

A400M Atlas In 1999, Airbus Military SAS was formed to produce military products, such as this four turboprop-engined mid-sized tactical transport. With a capacity more than a C-130, but less than a C-17, the prototype aircraft first flew on December 11, 2009, a year later than expected. Development program delays and cost overruns have delayed the aircraft more than three years, and engine issues have been identified too. However, the aircraft was certified by the European Aviation and Safety Agency on March 14, 2013, and more than two dozen transports will have been delivered by the end of 2016, against one hundred seventy four orders on the books.

Airbus still has orders for some six thousand seven hundred more airliners to be filled. According to a company press release on the handover day, “To date, the global Airbus fleet has performed more than 110 million total flights and flown some 215 billion kilometers (enough distance to travel from the Earth to the Sun some 1,500 times). Airbus aircraft have carried over 12 million passengers in commercial service – a figure representing approximately twice the world’s population.” Those numbers continue to grow… with new aircraft variants planned, and new projects coming “off the boards” too.