In the midst of one the east coast’s hottest summers on record, the sixteenth annual mid-week Atlantic City, NJ “Thunder over the Boardwalk Air Show” provided some cool relief with a hot air show.

High above the boardwalk, the Tropicana Hotel and Casino’s big screen enticed shore visitors with scenes from past air shows. Below, for the sixth straight year, the festivities kicked off Monday night with a parade saluting local military veterans. The two hour procession entertained viewers with floats carrying local American Legion organizations, local and state police marching units, military service representatives, Coast Guard marching bands, veteran motorcycle clubs and lots of classic automobiles. The parade watchers were especially vocal with “Thank You for your Military Service” when WWII vets rode past in their cars. All seemed to truly recognize and appreciate this gradually disappearing national treasure.

Experienced Atlantic City attendees know Tuesday is practice day and this year was no exception. Seeking reprieve from the hot weather, devotees packed the beach next to the cool blue ocean with its foamy waves. With refreshing beach breezes blowing, those dedicated fans were treated to the U.S.A.F. Thunderbirds practicing with the team photographer in the #7 jet closely attached to the diamond and delta as they flew their routine. Wednesday began with the traditional fly-by of six tow planes trailing long advertising banners. Since the venue’s inauguration, before the airspace closes, their fly-by has been an annual rite-of-passage offered to these familiar planes promoting local businesses. The official opening began with the U.S. Army Golden Knights jumping with the American Flag to the playing of the National Anthem as Rob Holland in his Aerobatic MXS circled the descending team. The Golden Knights in their Fokker C-31A returned later for a Mass Exit jump. For the past several years, noticeably missing from the roster was the annual participation by local New Jersey military flying units. Regular attendees had sorely lamented their absence but, with federal budget sequestrations over, those elements were back in force. There were booming cheers from the crowd as a flight of three 177th FW F-16s followed by a 108th ARW KC-135 flew by. Their mission was completed when the KC-135 extended its refueling boom for the receptive F-16s in a second fly-by. The four NJ ANG aircraft then passed down the beach to thunderous applause from the spectators as another flight of locals, the 1-150th Aviation Helicopter Battalion from Joint Base McGuire, NJ entered the show box. The three-ship UH-60s came in over the beach with “fast-rope” soldiers attached to long ropes slung from beneath the three helicopters. The Special Insertion and Extraction System are used by Special Forces to introduce and recover personnel in areas where an aircraft is unable to land. The viewers were captivated and astonished watching these brave soldiers tethered to moving helicopters, swinging hundreds of feet above the ground. The demonstration was a first for the air show and the on-lookers conveyed their appreciation for these courageous warriors. Rotary flight and acts of heroism were still on display when a U.S. Coast Guard MH-65 exhibited what they have been doing for the past one hundred years- saving lives through Search and Rescue. The Coast Guard has displayed every year since the show’s inception. The SAR demo is always a show-goers favorite, who was quick to communicate how much they value these blue-water heroes. More rotor blades were turning when ABC’s TV Chopper6, an Atlantic Care Medical and NJ State Police Helicopter passed by. Flying in from their New York City Field Operations Office, a U.S. Customs and Border Protection (CBP) H-60 hovered above a CBP boat during an Air and Marine Operations (AMO) Demonstration. CBP has broad law enforcement authorities at more than three hundred land, air and sea ports; screening all foreign visitors, returning American citizens and imported cargo that enter the U.S. The AMO is a critical component of CBP, dedicated to protecting the American people through advanced aeronautical and maritime capabilities. AMO’s specialized law enforcement capacities make significant contributions to the Department of Homeland Security along with other federal, state, local and tribal agencies. Military rotary-flight operations continued with the USMC Osprey Demonstration. The “Raging Bulls” Marine Helicopter Transport Squadron (HMR-261) MV-22 from New River, NC, swung in from behind the audience. Pulling up in front of the crowd, the Osprey backed-up, then hovered and “side-stepped” at show center. With its back door open, the tilt-rotor aircraft performed low enough over the ocean to create jets of spray from the glistening water just feet below! As quick as the MV-22 appeared, it disappeared down the beach to the wonderment of an amazed audience. The day also featured its share of exciting civilian acts. The line-up included Chef Pitts Aerobatics with his well know wingtip smoke, Warrior Aviation two-ship L-39s, Jim Beasley Jr. in his P-51 “Bald Eagle” Mustang flying along with Scott “Scooter” Yoak in his Mustang “Quick Silver”, the GEICO Skytypers racing the GEICO “Miss GEICO” boat and the always exhilarating Rob Holland in his MXS. Rob wowed the crowd last year and returned to do the same. Spectators held their breath during Rob’s non-stop thirteen minute fearless routine of Falling Leaf Spins, Snag Rolls and Hover-and-Hang maneuvers. As Rob departed from another heart-pounding performance, the witnesses exhaled a collective sigh of relief followed by roaring cheers that rolled down the beach. Rob had done it again!

The audience hardly had time to recover when it was the U.S. Navy’s turn to add some exhilaration of their own. There was excitement on the faces of anxious fans in anticipation of the F/A-18F Super Hornet Tactical Demo. Flown by VFA-106 pilot Lt. Danielle “Purple” Thiriot and WSO Lt. Ben “Bueller” Kovesci their entrance brought everyone on the beach and boardwalk to their feet. The thunderous jet noise from the full afterburner demo produced spine-tingling echoes that clapped off the Atlantic City skyline.

Procured by David Schultz Air Shows LLC, with suggestive input from the Atlantic City Chamber of Commerce, the show annually features returning favorites along with introducing some fresh acts. One of those new to the line-up for 2016 was Lee Leet in his Short Brothers Tucano. The Tucano is a two-seat turboprop, fully aerobatic basic trainer used by the Royal Air Force. The aircraft handles similar to a fast-jet, making it an excellent platform for training military pilots. The Tucano is a modified version of the Brazilian Embraer EMB-312 built under license by Shorts Brothers of Belfast, Ireland. Lee’s plane was the second of ten built by Embraer and sports serial number 0002. Lee tactfully demonstrated why the Tucano has been selected as a superb military trainer. Following several maintenance delays, the patient fans were reward with another grand presentation by the U.S.A.F. Thunderbirds. Their all white F-16s, accented in blue and red, sparkled as they drew lines of white smoke against a brilliant sky. Since its beginning, the Thunderbirds have always headlined Atlantic City’s “Thunder over the Boardwalk.” The team is scheduled to return on Wednesday August 23, 2017. 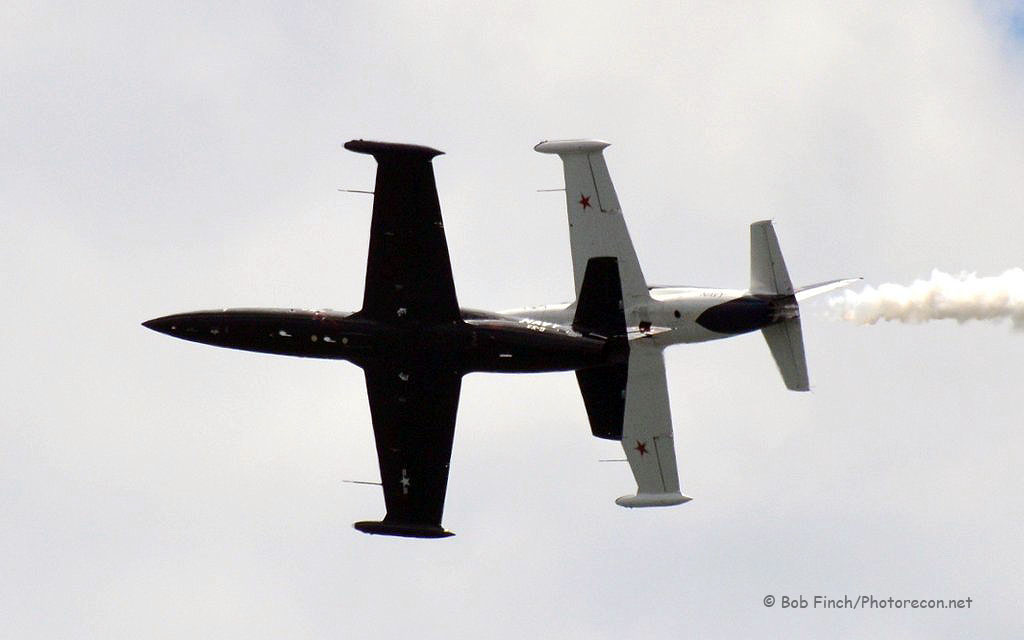 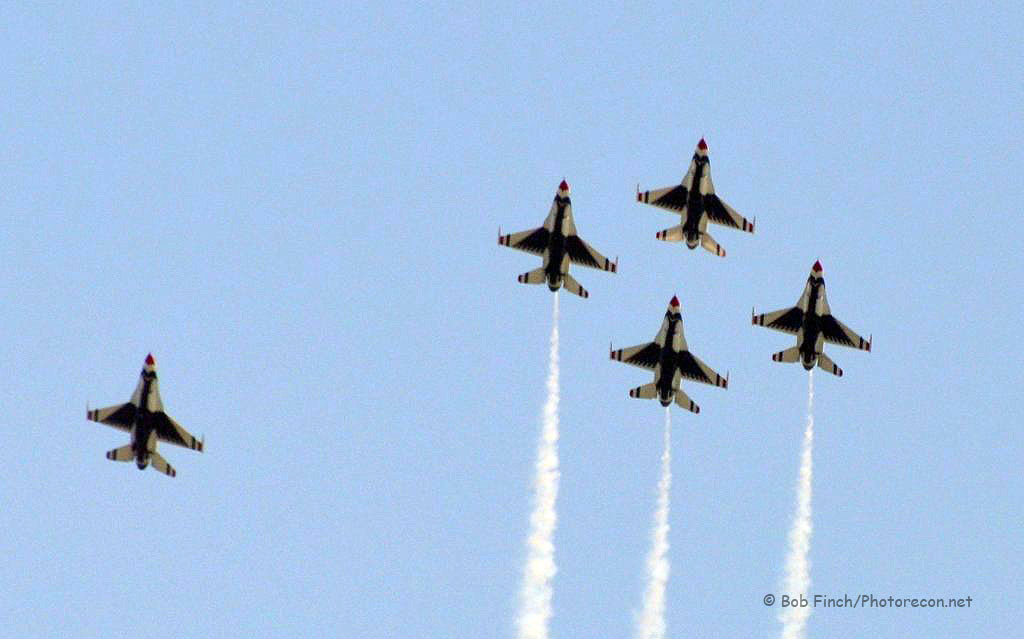 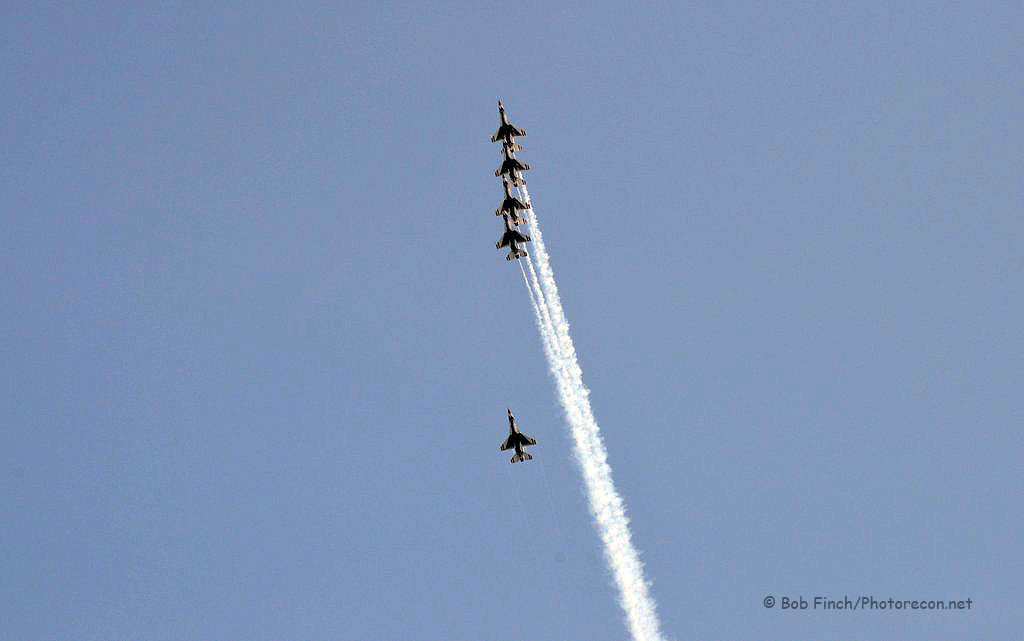 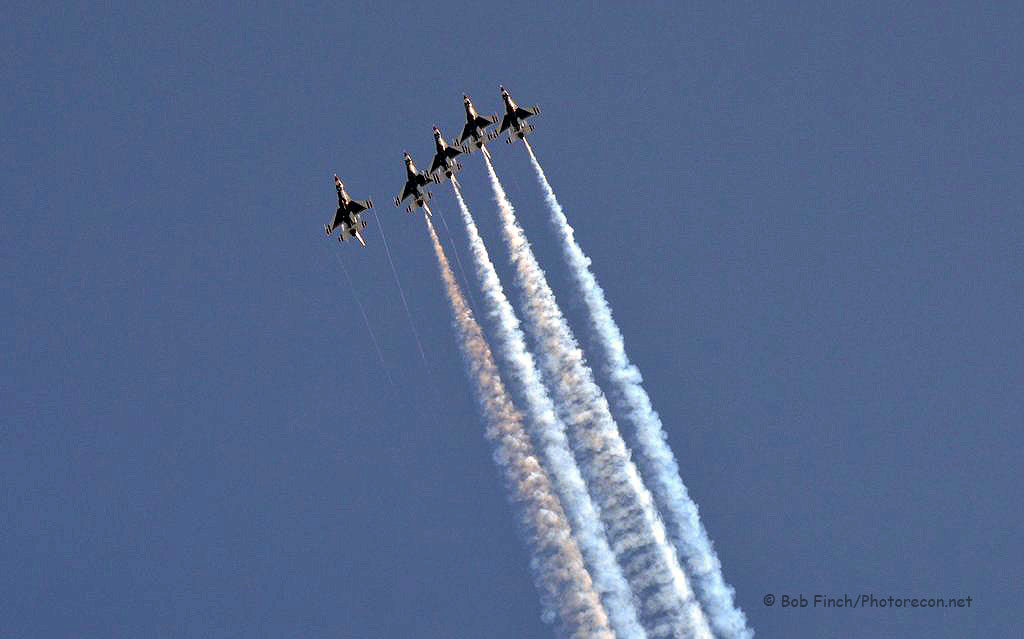 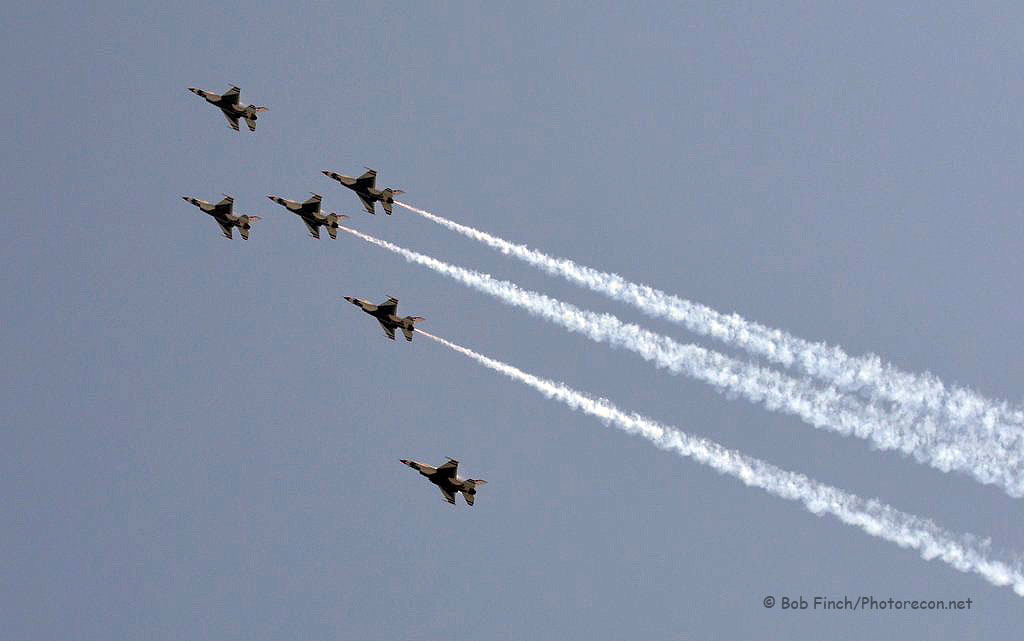 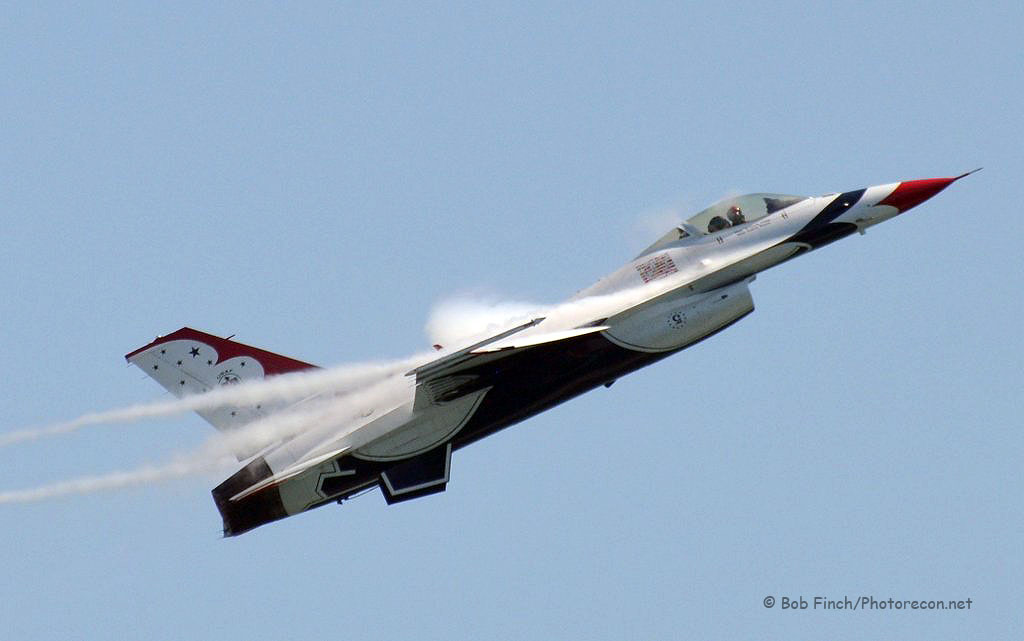 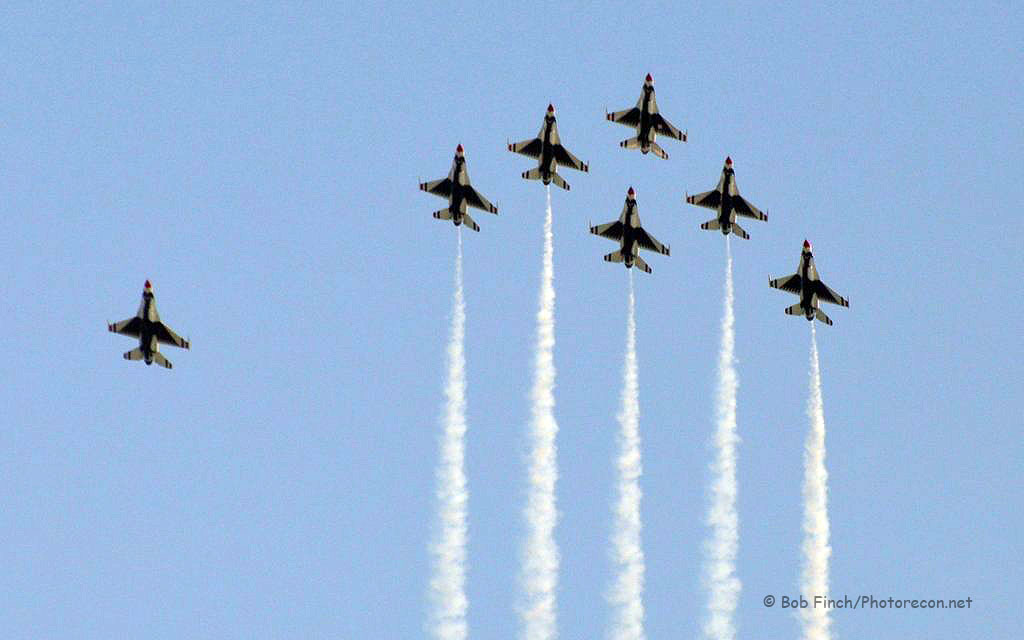 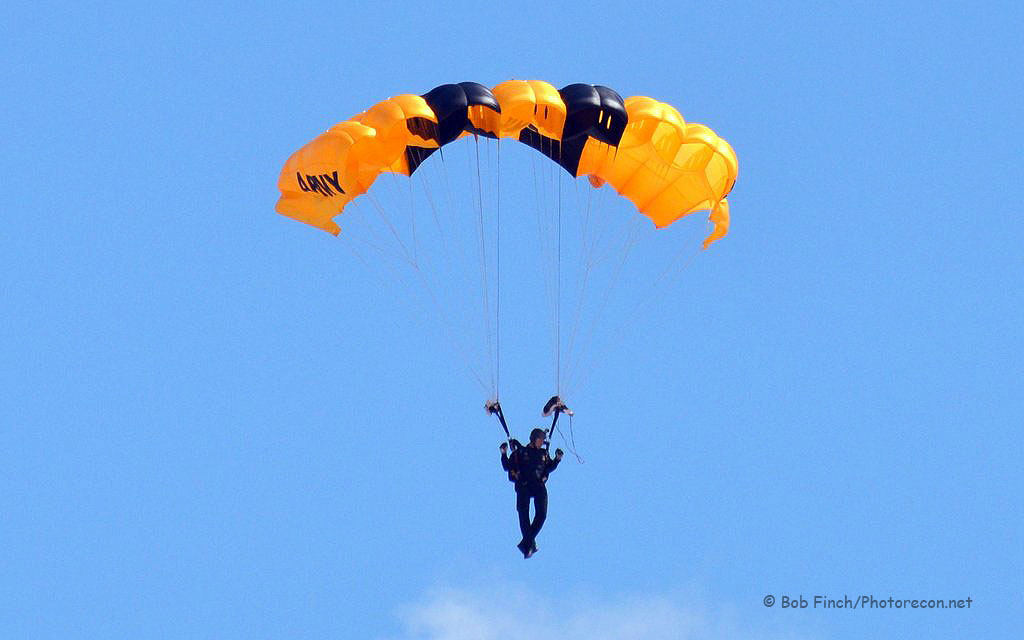 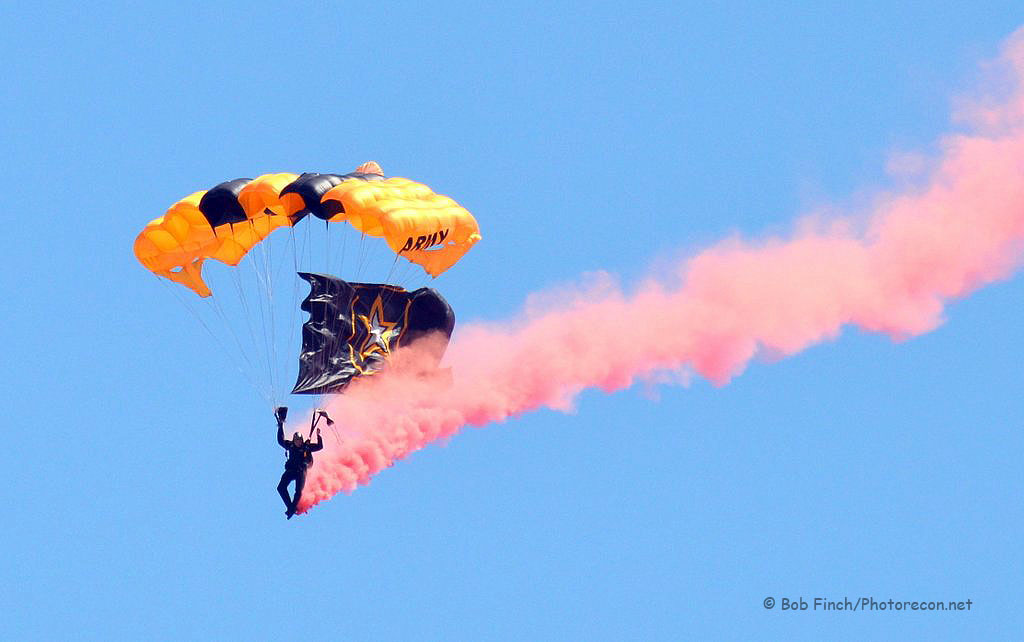 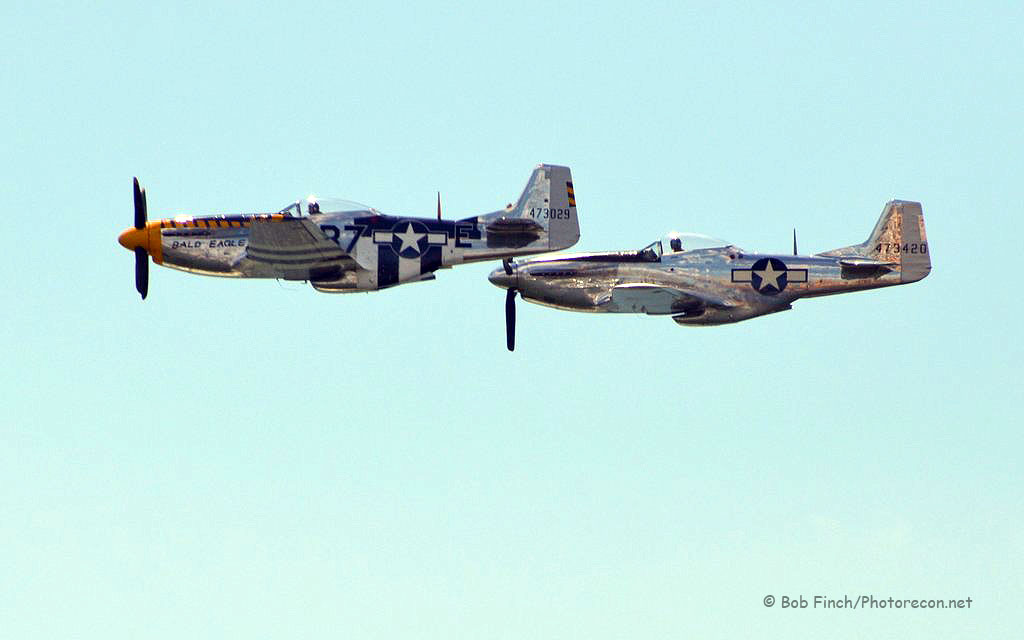 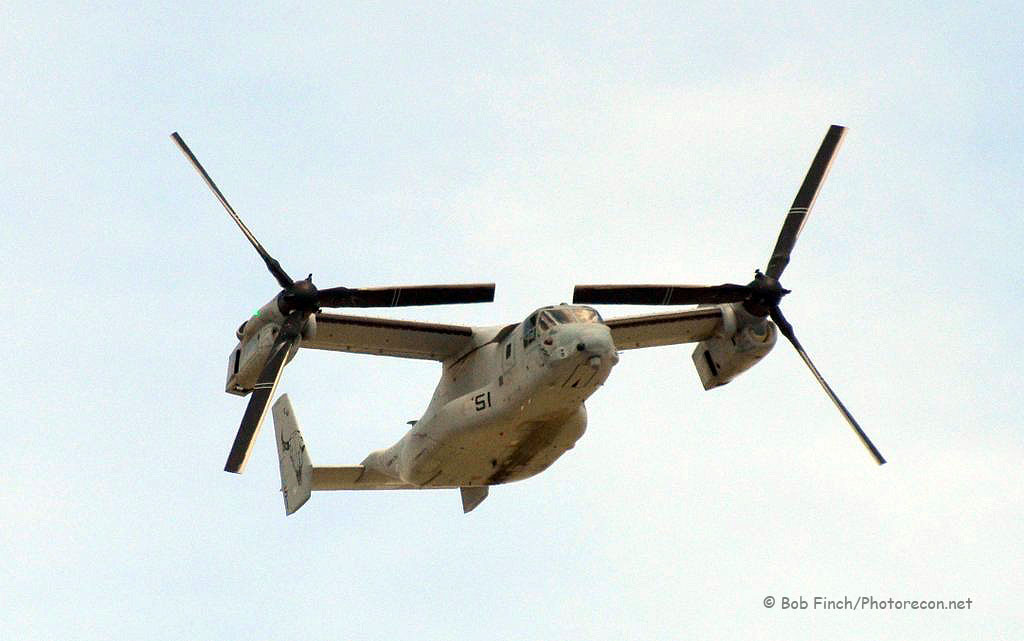 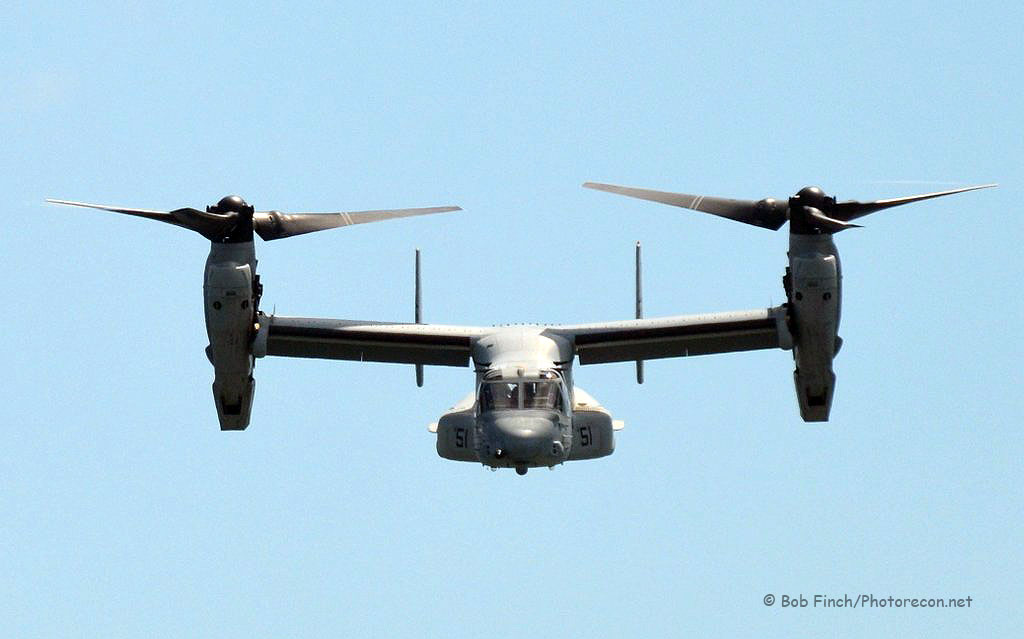 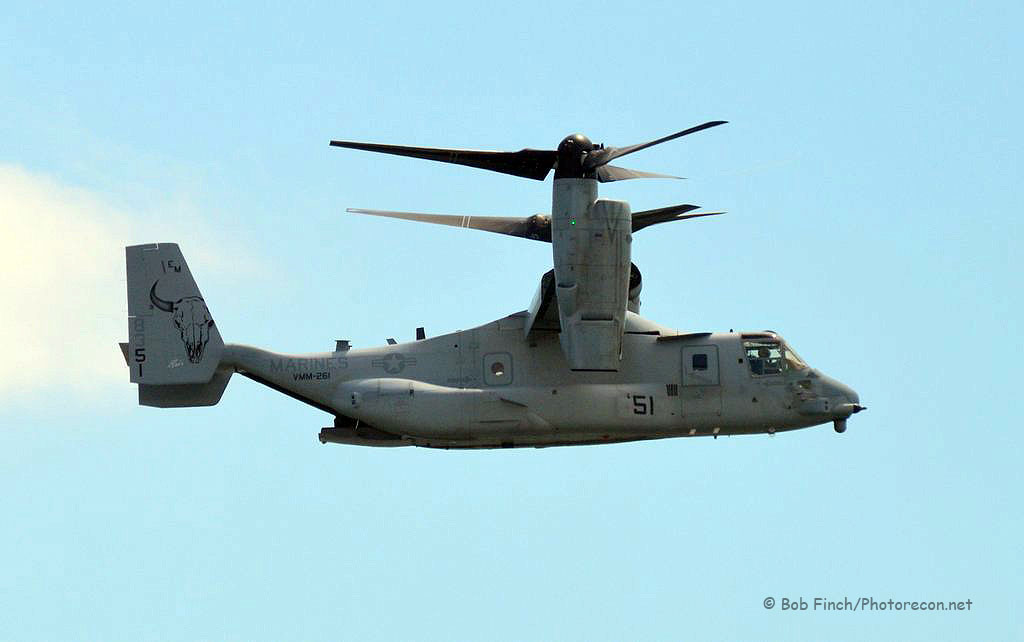 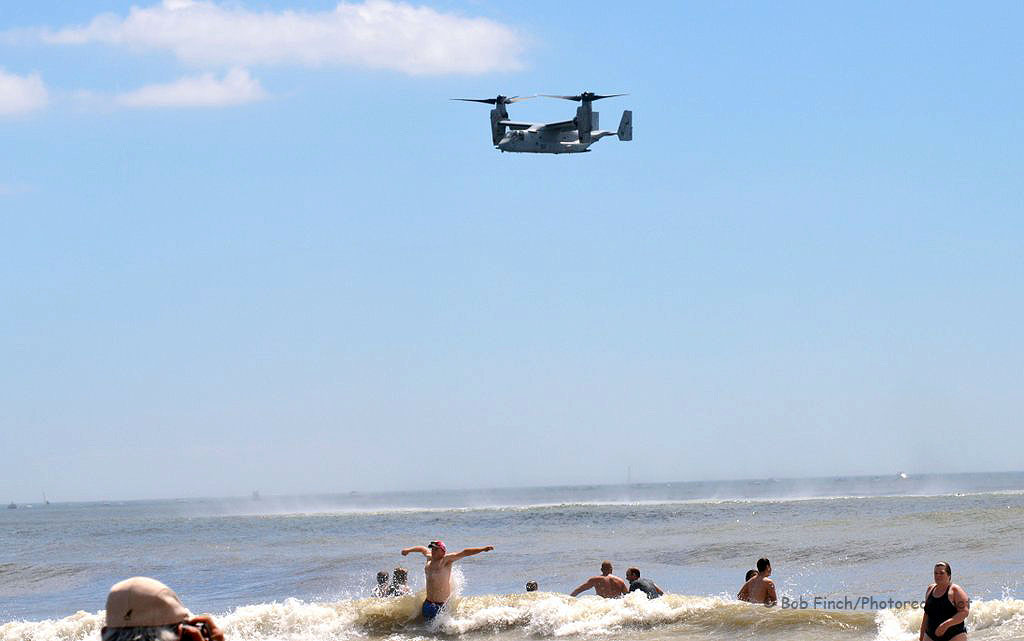 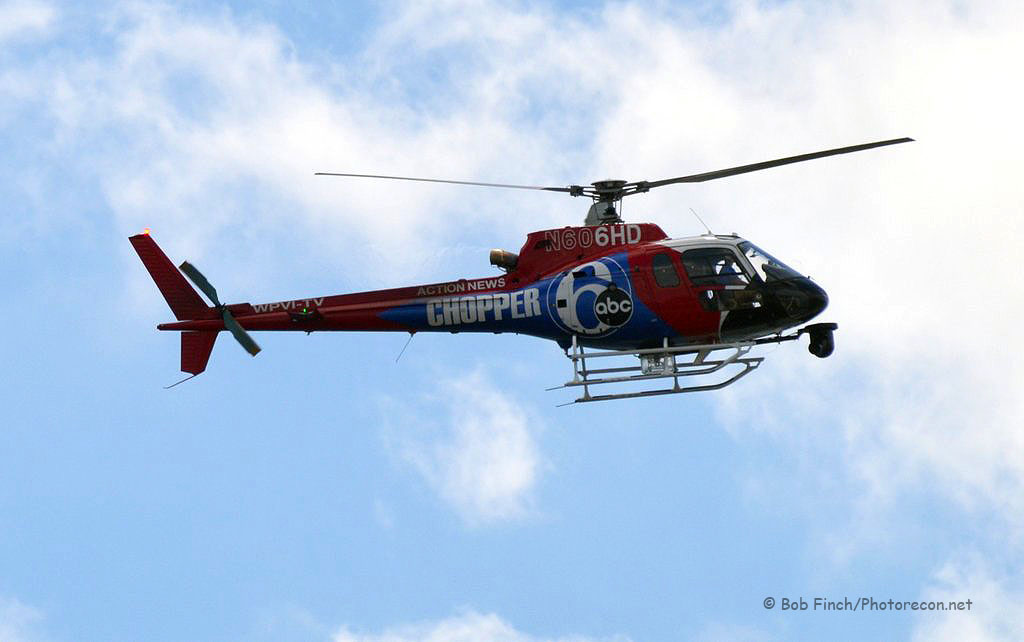 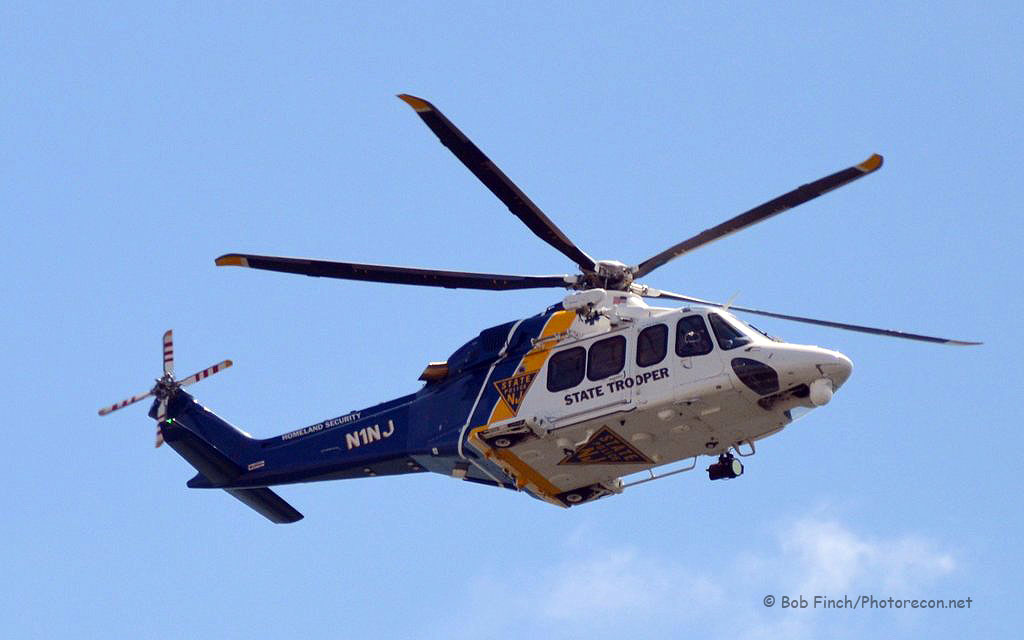 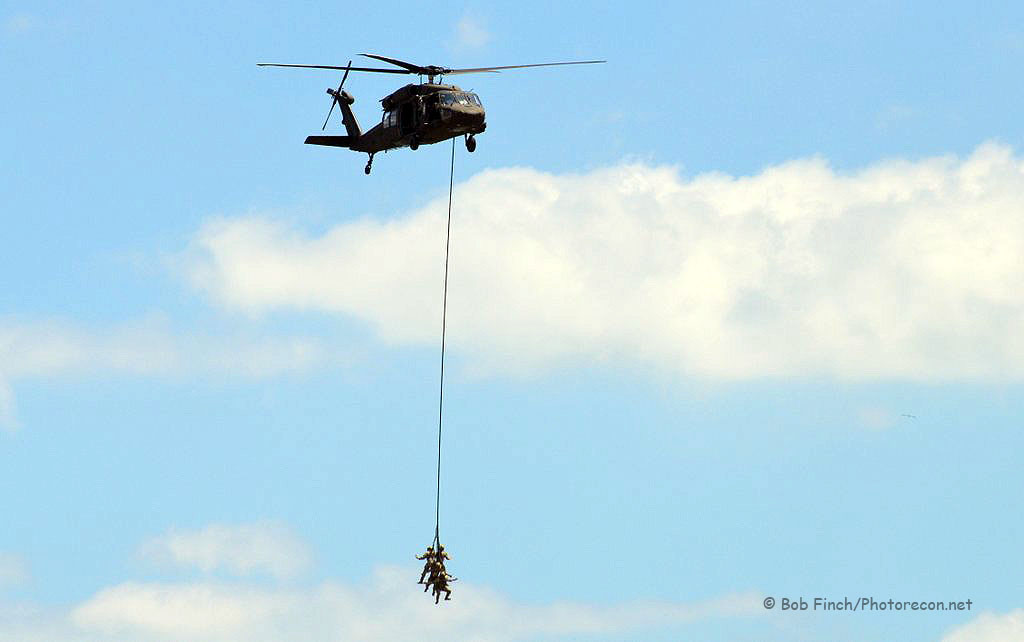 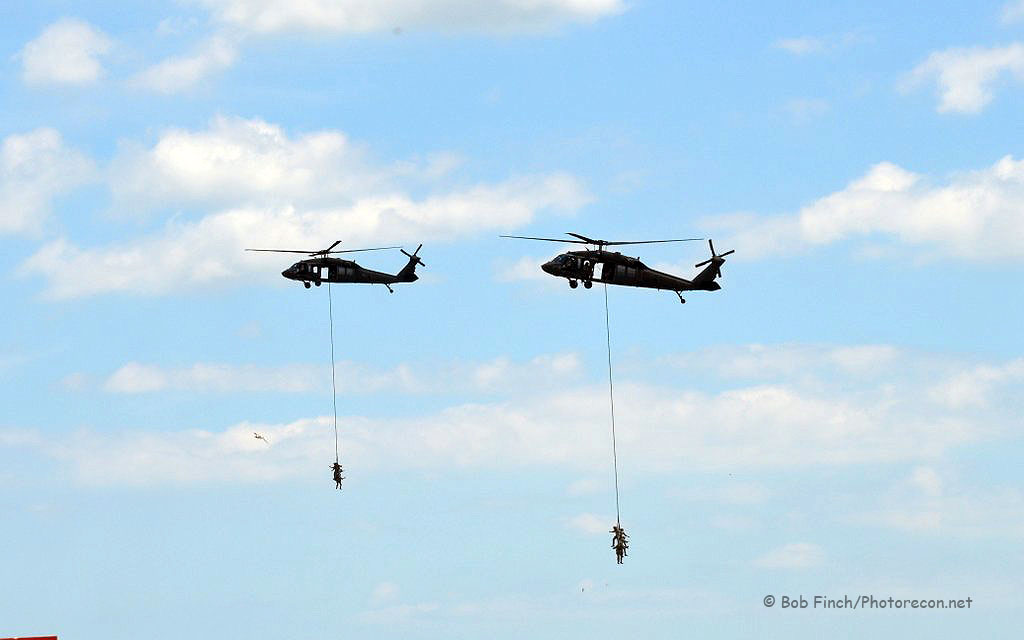 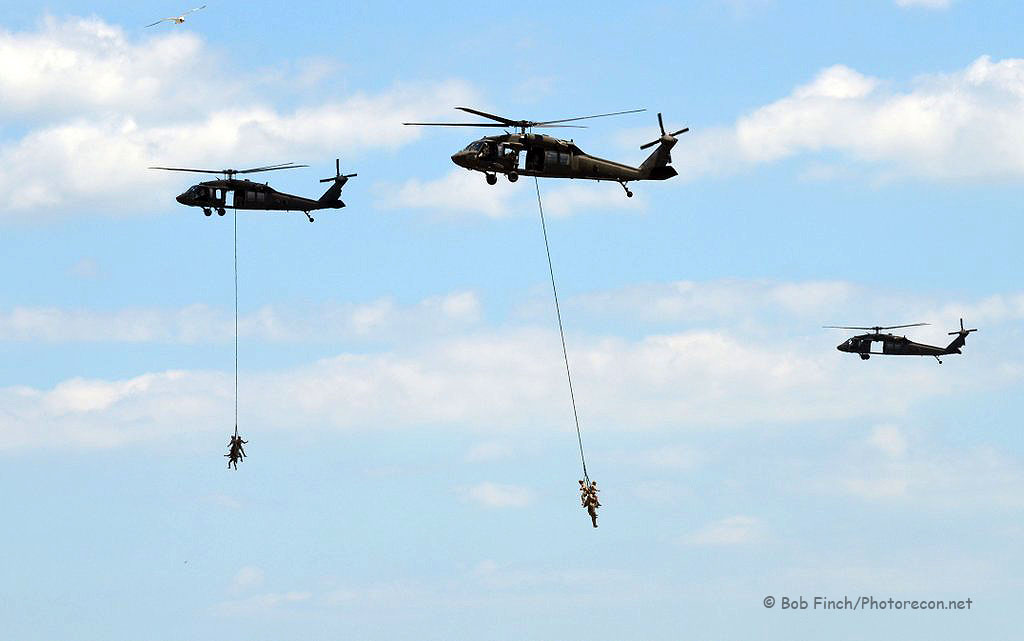 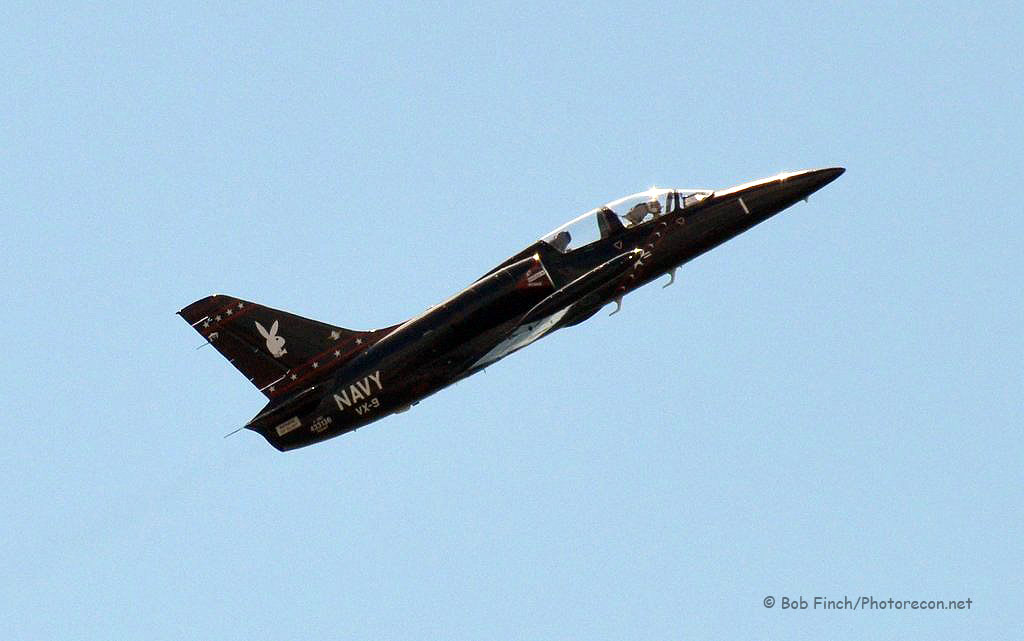