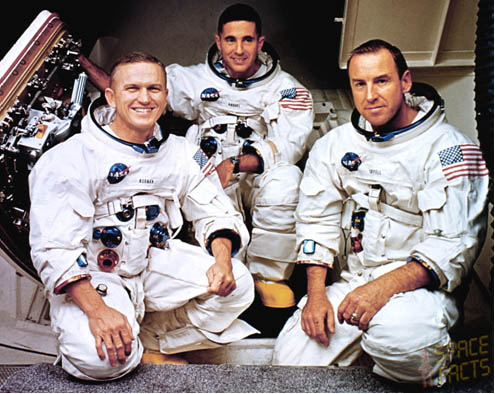 It is hard to believe that Apollo 8 and the crew, Jim Lovell, Frank Borman and Bill Anders, made that historic journey around the Moon, back in 1968! To celebrate that event, I had the recent opportunity to interview, USN (Ret.) Captain Jim Lovell, who not only made this historic journey, but was also on board that other important Apollo mission…..Apollo 13!

After the launch on December 21st 1968, the Apollo 8, was the first manned spacecraft which left the gravity of the Earth and this crew, had the most amazing journey of a lifetime; orbiting the Moon, with a spacecraft that was still new by space standards.

They will be remembered for ALL time, when they conducted a very special TV broadcast on December 24th 1968, when they recited various versus from the Book Of Genesis, as they orbited the Moon. This was the most watched TV broadcast of the time, with possibly, 2 billion people tuning in….

Here is what each man said:

“We are now approaching lunar sunrise, and for all the people back on Earth, the crew of Apollo 8 has a message that we would like to send to you.
‘In the beginning God created the heaven and the earth.
‘And the earth was without form, and void; and darkness was upon the face of the deep.
‘And the Spirit of God moved upon the face of the waters. And God said, Let there be light: and there was light.
‘And God saw the light, that it was good: and God divided the light from the darkness.'”

“‘And God said, Let the waters under the heaven be gathered together unto one place, and let the dry land appear: and it was so.
‘And God called the dry land Earth; and the gathering together of the waters called he Seas: and God saw that it was good.’
And from the crew of Apollo 8, we close with good night, good luck, a Merry Christmas – and God bless all of you, all of you on the good Earth.”

Here are more links to this amazing mission: