The U.S. Marine Corps recruiting slogan: “The Few. The Proud. The Marines.” has a secondary meaning these days… the Marines operate the last pair of some 57 McDonnell Douglas/Boeing DC-9/C-9 military jet transports. The C-9/DC-9 family has been used by multiple U.S. military branches, as well as civilian agencies and a few foreign operators, since the U.S. Air Force put them into operation in the late 1960s.

The McDonnell Douglas DC-9 (DC stands for Douglas Commercial) is a popular U.S. produced airliner, now all but retired from passenger service. Freighter versions still ply the skies in the U.S. and in many countries, but most copies of the fifty-plus year old design are reaching the ends of their useful lives. The DC-9 found favor with the U.S. Air Force, Navy and Marines, as well as NASA and a few foreign military operators too. Easily configured to carry passengers or freight – or a combination of both – it also served as a special use transport. And, just as commercial service has all but ended in the U.S., so does the military service of the DC-9. The U.S. Air Force accepted twenty-four airframes in two versions of the DC-9, designated the C-9 (C is for cargo, or transport) in military service. The twenty-one C-9A Nightingales were used primarily as medical evacuation transports, capable of configurations of up to forty litters, or four litters and up to forty ambulatory patients, or combinations of both. Specialized equipment was added to interiors, including a special oxygen system, a medical refrigerator, control panels for monitoring patients, and an auxiliary power unit that could power standard medical units to support a patient’s needs. An example of the C-9A’s importance is illustrated by their missions in October 2000, when crews flew C-9As of the 86th Aeromedical Evacuation Squadron between the Army base in Landstuhl, Germany and both Djibouti and Yemen, to bring 28 wounded sailors of the USS Cole bombing back to the Army Medical Center. The first active C-9A “Air Evac” jets became operational in 1968, the last one was retired in 2005. The three Air Force VC-9Cs were VIP-configured jets, used as a transport for the Vice President, First Lady, or other very senior government officials. These included high levels of comfort, privacy, and utility. They even stepped in as Air Force One once in a while, especially when the Presidential VC-137s were too large for a destination’s runways; the VC-9C filled in adequately. The trio were operated between 1975 and 2011. The Navy and Marine Corps version, designated the C-9B Skytrain II, was fitted for use as a cargo and passenger transport, used heavily for priority logistical support. Up to 100 passenger seats could be fitted, or a combination of freight and seats could be used. Initial use began in 1973, and the last Navy-operated C-9 was retired in 2014. The Navy ultimately operated twenty-seven jets, and the Marines a pair more. After an initial purchase of C-9Bs, five more civilian DC-9s were purchased by McDonnell Douglas, and converted into additional C-9Bs. Skytrain IIs were routinely operated across the Atlantic Ocean, although multiple refueling stops were normally required, depending on the bases they flew between. The pair of Marine C-9Bs (one 2014 Marine photo calls a jet a UC-9B – Utility Transport) are based at MCAS Cherry Point, and still operated by Marine Transport Squadron One (VMR-1). These are the last C-9s in service with the U.S. military; they’ll be replaced by Boeing C-40A Clippers (B-737-700C variant) in a few short years. An interesting note: one of VMR-1’s C-9Bs became the first U.S. Marine Corps aircraft to visit the former Soviet Union, when in February, 1990 one carried the Marine Corps Band to a performance in Moscow.

NASA acquired a surplus Navy C-9B in 2003 to replace its’ aging C-135 “Vomit Comet”, used as the Reduced Gravity Platform. Flying a parabolic flight path, it offered scientists and astronauts time in a weightless, or reduced gravity environment. N932NA, the jet’s registration number with NASA, was used to train pilots in large aircraft, and as a transport for Space Shuttle operations between landing sites and operation centers, too. It has since been retired. Another former Navy C-9B has had an interesting life… originally a DC-9-33 operated by Martinair (Holland), the aircraft was one which was acquired by McDonnell Douglas for the Navy and was converted to a C-9B in 1983. In 2003, the Navy struck the aircraft off of its books, and the National Nuclear Security Agency began operating this jet under a civilian registration – again!

All of these military C-9s were based upon the DC-9-32 version; some Navy jets contained added fuel tanks which expanded the version’s range when compared to civilian versions. All but the VC-9C VIP transport were equipped with a large cargo door on the port side of the fuselage, forward of the wing and behind the entry door. In foreign use, the Italian Air Force operated a pair of DC-9-32s for a number of years, mainly as personnel transports. A pair of C-9K transports were purchased for the Kuwait Air Force under the Foreign Military Sales (FMS) program. These were originally Navy serials 160749 and 160750, and were similar to the Navy’s C-9B. Both Kuwait and Italy have already retired their DC-9s/C-9s.

The USAF’s C-9A aeromedical mission was taken over by larger jet transports, fitted with palletized medical equipment. The VC-9Cs were replaced by larger C-32As (B-757s) and C-40B/Cs (B-737s). The Navy replaced their C-9Bs with Boeing C-40As, a convertible cargo and passenger version of the B-737. Once the Marine Corps swap their C-9Bs for C-40s, the DC-9/C-9’s military career will be over. Lauded as an easy aircraft to maintain and operate, they served in a number of important roles for the United States around the world. Now, they are indeed the few, and the proud. 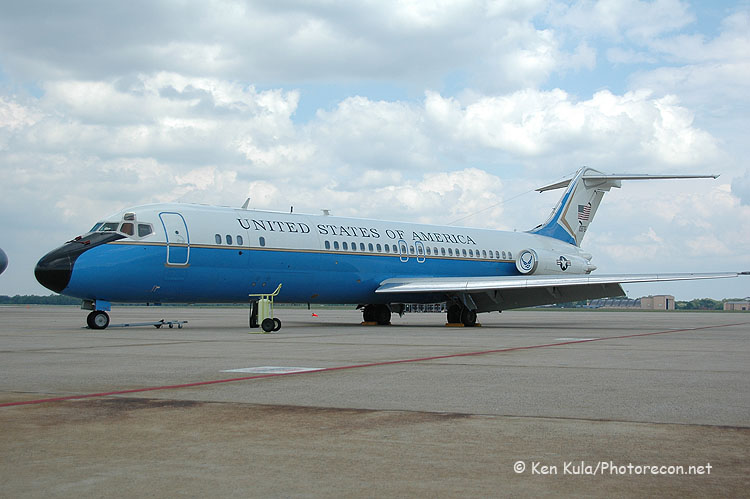 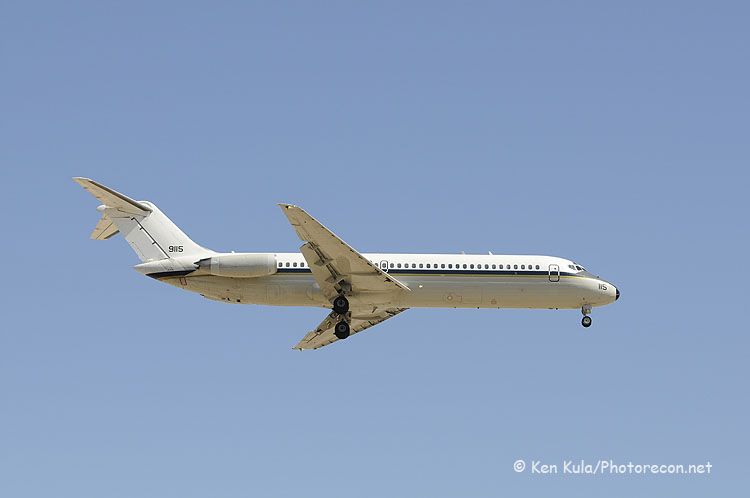 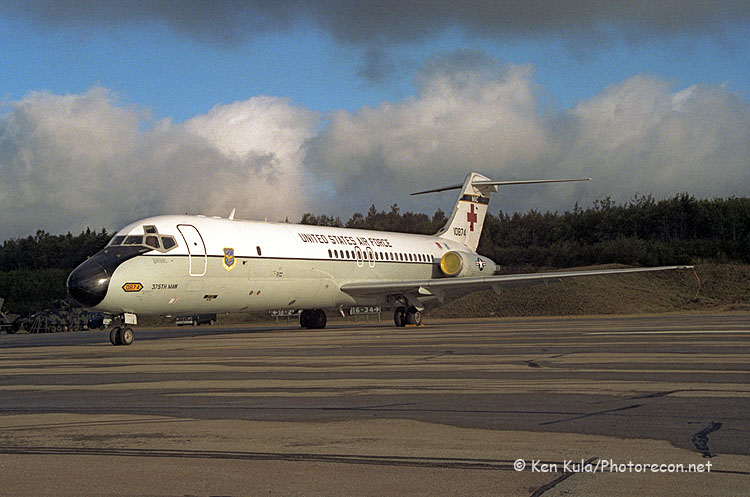 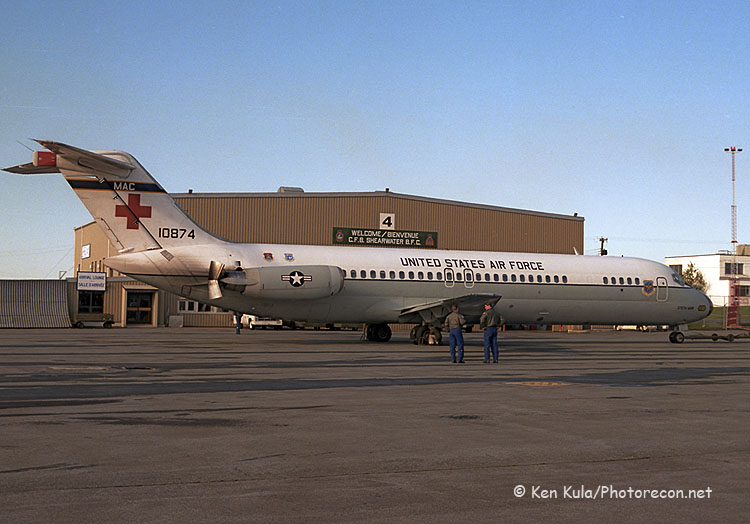 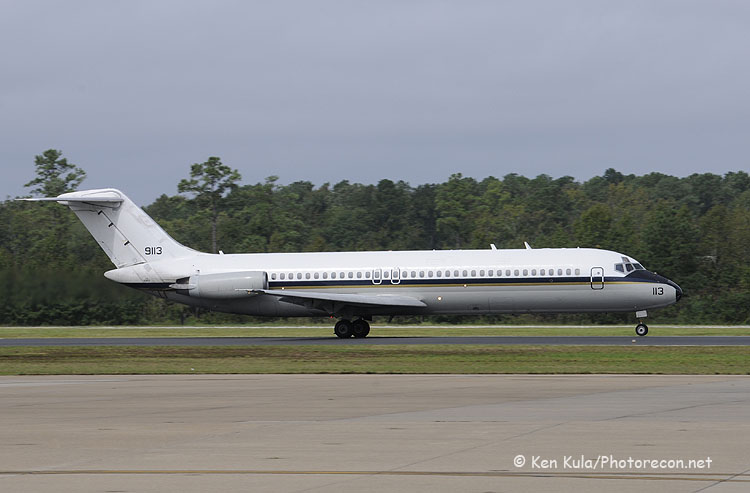 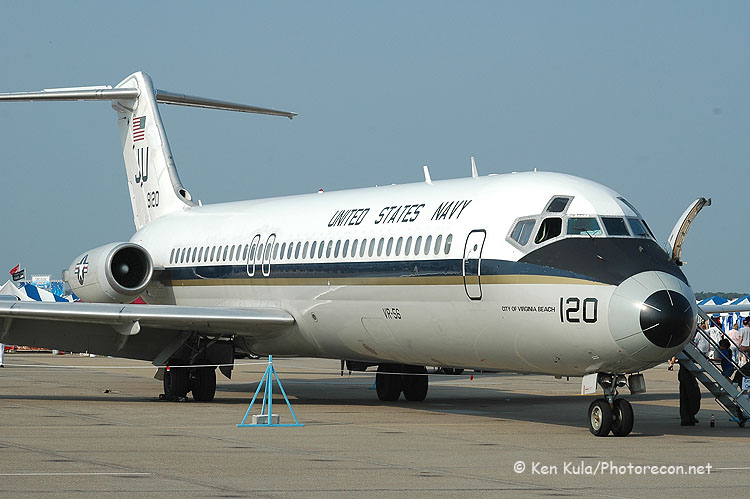 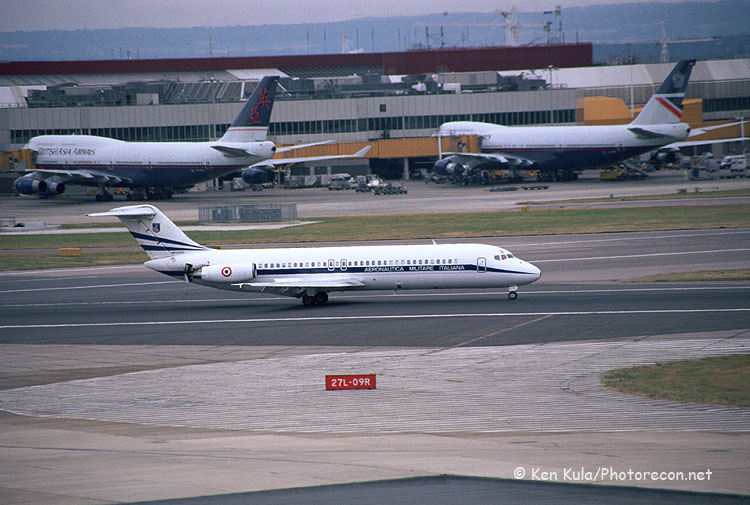 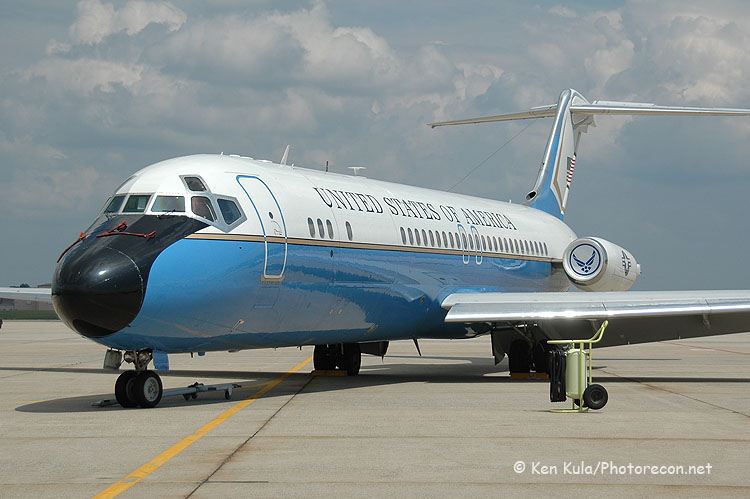 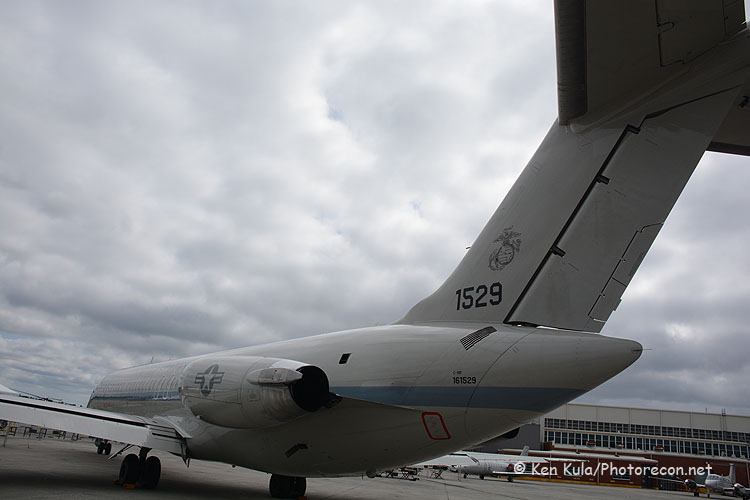 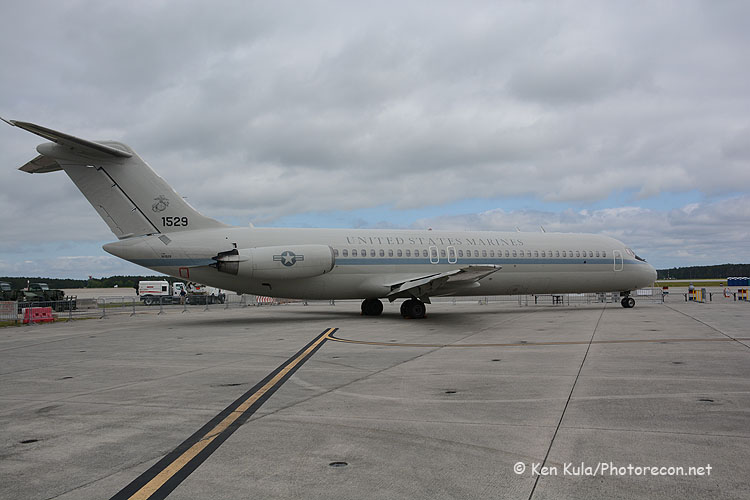 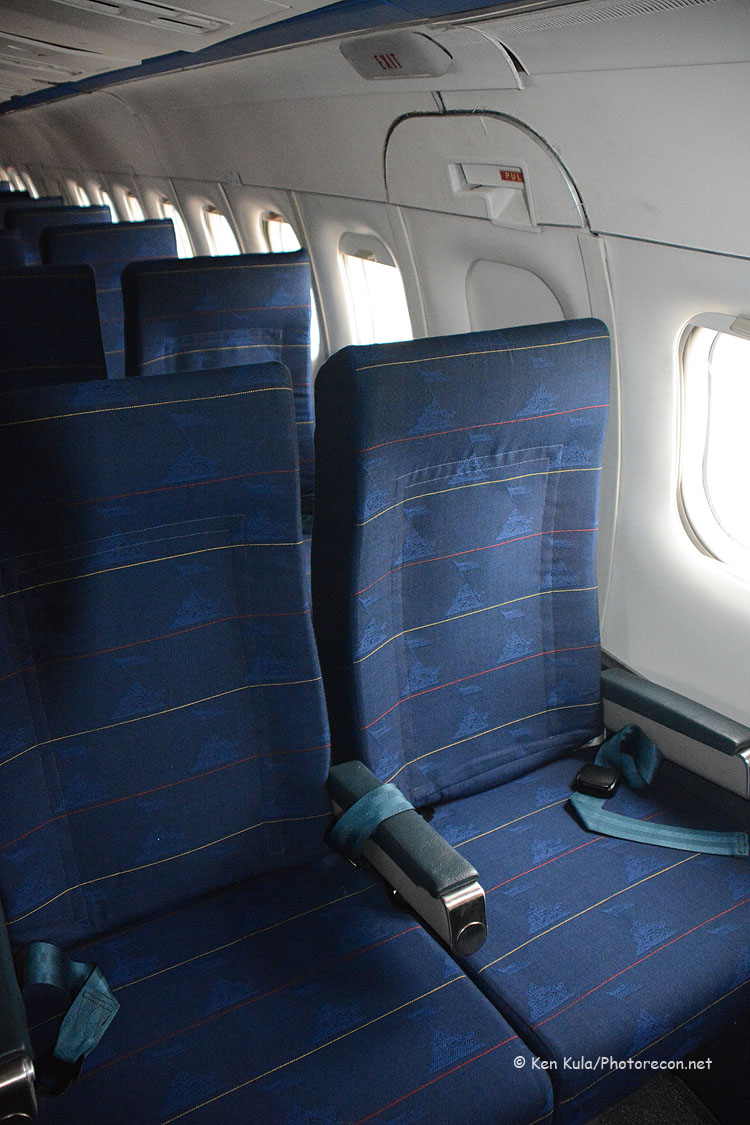 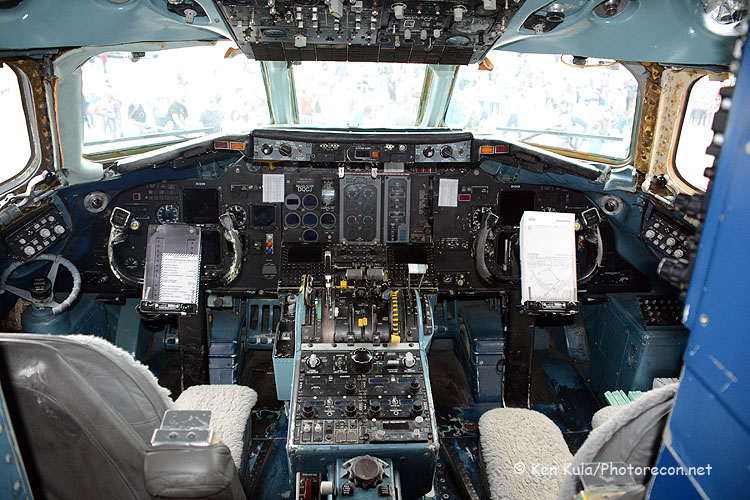