On the first day of the Symposium, displays of historical and/or technological important items were arrayed within and adjacent to NAS Jacksonville’s cavernous VP-30 (Patrol Squadron 30) hangar.  Survival gear, weaponry, and two P-3 aircraft were available for Symposium attendees to inspect.  A mock-up of the Navy’s new Broad Area Maritime Surveillance (BAMS) unmanned aircraft (a derivative of Northrop Grumman’s RQ-4 Global Hawk family) drew many visitors.  Boeing’s travelling P-8A Poseidon cockpit simulator and presentation display truck offered a look to at the future of maritime patrol.  The cockpit simulator within is an actual Boeing 737-500 nose section from a retired United Airlines jet, outfitted with the new glass cockpit instruments that the future patrol and reconnaissance jet will be equipped with.  Hundreds of people gathered for the event… many in flight suits, and many more wearing the distinctive Navy blue ball caps with gold lettering that identified them as retired MPRF members.  People from the two groups mingled and conversed quite freely and more than a few reunions of former classmates, now spread across the globe, were evident.

Over the years, Navy patrol and reconnaissance aircraft have taken on many shapes and sizes.  One of the most interesting and attention-getting types of aircraft in use since 1915 is the airship; more specifically the blimp.  Originally used for observation, the aircraft has been adapted for patrol, search and rescue, anti-submarine and early warning radar duties.  Although the Navy suspended use of blimps in 1962, a single example was purchased in 2006 and is assigned to NAS Patuxent River-based VXS-1, Scientific Development Squadron ONE, as a test bed for various airborne sensors and other research and development programs.  Although Navy property, the blimp is operated by Integrated Systems Solutions Inc..  It resides at historic Lakehurst NJ, but it flies from Florida in the wintertime for weather considerations.  It made a short trip to Jacksonville to be on display across the runway from the VP-30 hangar during the Symposium.

On hand during a tour of the Navy’s sole MZ-3A blimp were two retired Navy airship veterans; Pilot George Allen and Airship Rigger Don Walsh.  Don Walsh pointed out the interesting method of attaching the ship’ gondola to the envelope by suspending it with wires attached directly to the skin and tightened by turnbuckles.  There’s no framework in a true blimp to hang structures from, it’s just a large envelope filled with (in this case) helium.  Pilot George Allen said that his longest mission was 47 hours aloft, although he had been on longer missions without being the command pilot.  As a Naval Aviator in the 1950’s, he once flew a blimp, helicopter, and jet aircraft all in the same day!  George brought along his original Navy log book, and Commander Jay Steingold, VXS-1’s Commanding Officer, endorsed it after he spent “point one” hour aloft in the airship (well, the gondola was floating off of the ground…albeit tethered)!  Amazingly, Commander Steingold noted that today’s pilot log books haven’t changed from the 60-year old example he held while signing off George’s most recent blimp activity.  Current pilot Mark Kynett explained that the blimp is fully IFR rated and is in the process of having a GPS certified aboard it too.  Although the blimp is bright white with a small American flag attached to the tail, work is being done to allow the wording “U.S. NAVY” to be marked on each side, like the 1950s military scheme.   Another interesting note is that the blimp carries both a civil and a military registration number: it is Bureau Number 167811, and N157LG.

One of the most visible of the Symposium’s events occurred on Monday, as the Heritage Fly-in of historic aircraft commenced.  Many of the 500-plus veterans that registered for the Symposium, plus a similar amount of active duty personnel and their families, gathered to watch a series of arriving aircraft on Monday afternoon.  Beginning with a N2S-3 Stearman biplane and a TBM-3E Avenger, a series of trainers and patrol aircraft arrived and parked on a ramp adjacent to the hangar that would contain many of the Symposium’s dinners, speeches, and other activities.  A pair of CONA-colored trainers, a T-34C and T-44A, were included in the procession.  Next, the three P-3 Orion aircraft from the Navy’s three major patrol bases, painted in special CONA throwback color schemes, arrived carrying colors from the 1940s, 1950s and 1960s.  Finally, the newest member of the MPRF community touched down; an example of the new Boeing P-8A Poseidon jet that will supplement and ultimately replace the current P-3, and probably the EP-3E Aries electronic eavesdropping aircraft.  The P-3 community is about to celebrate 50 years of P-3 experience, whose design is based on the Lockheed L-188 Electra airliner.

A rededication of a restored PBY-5A Catalina amphibian, part of a fine collection of retired naval aircraft at the base’s Heritage Park, was to be one of the last events.  The park contains several Navy patrol aircraft including the Consolidated flying boat, a P-3 Orion, an S-2 Tracker, an S-3 Viking, and a P-2V Neptune patrol bomber too, as well as more jets and helicopters.

The 2011 MPRF Symposium and Reunion offered a chance to see and hear how an important part of Naval Aviation has evolved, as patrol and reconnaissance duties have undergone many changes over the hundred years of its existence.  A vast amount of history, both from an aircraft point of view as well as the human side of things, was on display at NAS Jacksonville.  “Honoring the Past…Forging the Future” was an appropriate description of the event. 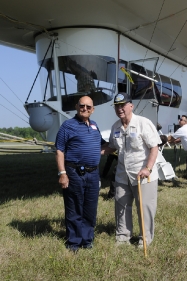