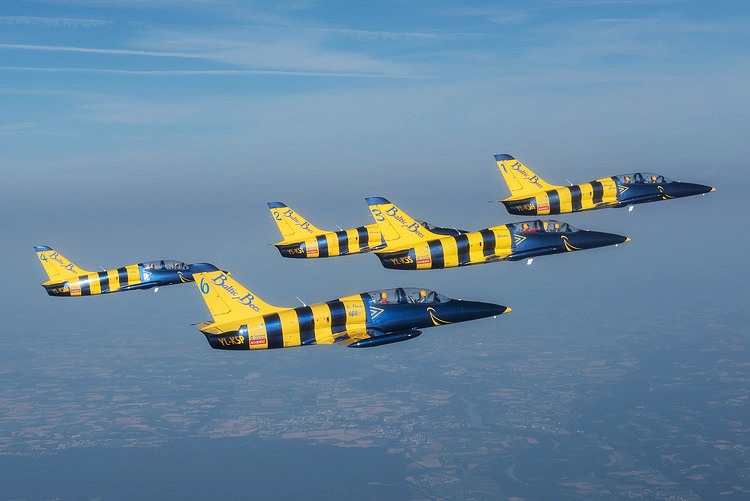 The photography of Dietmar Schreiber.

With 42,000 spectators around Lake Wolfgang and 286 take-offs and landings on the lake, the Scaleria Air Challenge 2015 was the biggest floatplane event to ever happen in Austria. Organized and sponsored by the Scalar Event Resort in St. Wolfgang – upper Austria, the Scalaria celebrated its tenth anniversary in July 2015. Once again it was a well organized and enjoyable event set in the fantastic landscape of the Salzkammergut.

Flying participants were The Flying Bulls with its shiny fleet, the Breitling Super Constellation, the Baltic Bees Jet Team and Iren Dornier`s Do24. Beside these, many smaller amphibian and float planes from all over Europe visited the Lake. Flying highlights were the Flying Bulls P-38, Corsair and Alpha Jet formation, the Flying Bulls DC-6 formation with the Super Constellation, and the Baltic Bees Jet Team display. During the Scaleria we had the chance to meet the great crew of the Baltic Jet Team. A wide range of nice pictures on the ground and in the air were the result of that meeting. The Baltic Bees are a professional civilian aerobatic jet team equipped with six Czech-built L-39C Albatross airplanes which are light jet trainers designed for advanced aerobatics. The home base of the team is Jūrmala airport (EVJA), 60 km west of Riga, Latvia. The team was formed in 2008, performing as a two-ship formation. After two more jets were added to the team a full display program was created. A fifth was added, and after the addition of the 6th aircraft, the team to created an advanced display program and gained a favorable reputation as a professional civilian aerobatic team. Aboard from the beginning of the team, the well known aerobatic and solo pilot Valery Sobolev created the display program. A flight instructor, he was the only team member that had previous experiences in team aerobatics. Since the beginning of the last century, the Wright Brothers’ original Flyer design has changed dramatically, and the sky has been crisscrossed with many distinctive jet planes. L-39C Albatross takes a worthy place in this lineage. The aircraft used by the “Baltic Bees” is the L-39C Albatross, a tandem 2-seat jet training aircraft in use by various, mainly European air forces. It was developed by the Czechoslovakian firm Aero Vodochody under a Warsaw Pact contract, directed to create a military training aircraft for the uniform preparation of pilots of the Air Forces. Now the plane has found wide popularity all over the world, both among private owners of the plane, and aerobatic jet teams. The airplane possesses good technical, aerodynamic characteristics and simplicity in control. The aircraft includes zero-height ejection seats for pilot and trainee.

On the first part of a ferry flight from Salzburg to their home base in Latvia, we had the chance to join the Baltic Bees. It was a great experience to fly on board one of their L39s to Lodz in Poland.

Article and photos copyright by Dietmar and Alex Schwarz, August 2015