The Other Jones Beach Air Show Jones Beach, NY, had a big Memorial Day Air Show on Saturday, May 27th. Show Center was at the classic Memorial Tower, at the center of Jones Beach State Park on the ocean, south of Freeport, Long Island. If you went to Jones Beach, it’d be a long walk from the parking lots to the water line! Although it was relatively mild on that Saturday, there have been days at these beach air shows – Jones Beach NY, Atlantic City NJ, Ocean City MD – when it could be in the 90’s and watching an air show there under those hot conditions could be like being in the Sahara Desert – unless you were neck deep in the water.

But for many Long Islanders, there is another more civilized solution – go to the launch point at Republic Airport and, if the wind is right, watch the planes taking off right next to you at Runway 1/19 next to the American Airpower Museum. Additionally, you get to see all the AAM’s flyable warbirds. Usually everything for the show flies out of Republic; and the GEICO Skytypers are based right there at Republic too. When the Thunderbirds or Blue Angels launch from Republic, the perimeter road around the Airport takes on a carnival feel with cars lining both sides of the road, tailgate parties everywhere, hot dog trucks, music blasters, American Flags, and even sometimes a live rock band takes part. This year was a bit milder because the T-Birds were launching from McArthur Airport about 20 miles to east… so some of the afterburner fanatics went over there to watch the take offs.

The 2017 Jones Beach Air Show had a pretty good lineup this year. The USAF NYANG 106th Rescue Wing (106th RQW) from the Francis S. Gabreski Air National Guard Base in Westhampton Beach (at the eastern end of Long Island) was once again a participant. They flew directly out of their ANG Base. They did a Combat Search and Rescue performance with their 102nd Rescue Squadron HC-130P Hercules tankers, their 101st Rescue Squadron HH-60P Pave Hawk SAR combat helicopters, and their Para-Rescue Personnel from the 103rd Rescue Squadron. The 106th Rescue Wing in Long Island was the same unit that lost a Pave Hawk rescue helicopter and flight crew while attempting a rescue of a sail boat off Long Island in a severe storm in the 1990s – that later became called “The Perfect Storm”. That storm and attempted rescue later became a best – selling book and a popular movie entitled “The Perfect Storm”. The rest of the aircraft, except for the Thunderbirds, all flew out of Republic. The US Army Parachute Team “Golden Knights” had a series of jumps from their Fokker C-31A Troopship jump plane. They have two such aircraft plus a smaller UV-18 Twin Otter Series 400 aircraft. They have two parachute teams – the Gold Team and the Black Team – in honor of their official team colors.

The American Airpower Museum launched many of their flyable warbirds, which was fun to watch up close at Republic. The Bayport Aerodrome Society from nearby Davis Field, a 2,700 foot grass strip in Bayport near Islip Airport, came over with a formation of some of their antique bi-planes from the 1920’s. Davis Windmiller did some stunt flying with his Zivko Edge 540 red mono-wing airplane. John Klatt Airshows went up with their Jack Link’s “Scream’in Sasquatch” Jet WACO 1929 Taperwing Bi-Plane. This reinforced and modified WACO aircraft has both a Pratt & Whitney 985 Radial prop engine and a General Electric CJ610 (J85) belly mounted jet engine with 3,000 pounds of thrust when fired up. The WACO’s cockpit was moved three feet aft to accommodate two separate fuel tanks for the 100LL Av Gas and for the Jet A fuel. Matt Chapman came in with his yellow Embry-Riddle Extra 330LX aerobatic monoplane. Sean Tucker came over for some aerobatics with his red bi-wing Oracle Challenger 3, a customized Pitts Special airplane. Later something unusual came over – the Farmingdale (LI) State College “Flying Rams” flew fiveof their twenty-two college-owned aircraft in a show-opening flyby with a racetrack flight over show center. The Warrior Flight Team came over the beach with their two Czech L-39 Albatrosses – the dark blue Navy VX-9 “Black Bunny” with call sign “Vandy-1” and the blue and white Aggressor aircraft with the red star tail with call sign “Roman-86”. The home-based GEICO Skytypers came in with their six World War II-era SNJ-2s for their usual 1, 2, 4 and 6-ship simulated air combat performances. Finally, with their standard Take Off Time of 1500 hours, the USAF Flight Demonstration Squadron “Thunderbirds” joined the beach crowd exactly on schedule with forty minutes of amazing formation flying. It was the usual stuff but it’s always fun to watch. Except for the 106th Rescue Wing and the T-Birds, the remaining show aircraft, including many of the American Airpower Museum’s warbirds, all launched from Republic Airport. The Museum is located right at the end of Runway 1/19 and allows for viewing up close of the take offs and landings of the show aircraft. The Museum Ramp was treated like an air show with an announcer calling the take offs. All aircraft in the hanger were moved out except for the Grumman EA-6B Prowler (which should have been) and the PBY-5 Catalina (which has been undergoing restoration for years). The AAM staff were also moving airplanes around the ramp which was fun to watch. Plus, another great warbird, the B-17G Flying Fortress “Yankee Lady” (44-85829) was visiting from the Yankee Air Museum at Willow Run Airport in Ypsilanti, Michigan, and was offering twenty minute rides for a few hundred dollars.

The AAM Ramp had a number of non-flying static warbirds, some sort of new, on display: the Republic F-84 Thunderjet; the Republic F-84F Thunderstreak; the Republic F-105 Thunderchief (Thud); the Lockheed T-33 Shooting Star; the General Dynamics F-111 Ardvark; the Fairchild-Republic A-10 “Warthog” and the Cessna 0-2B Skymaster “Oscar-Duce” (67-21448) in Vietnam colors. This “B” version was noted for being equipped with loudspeakers and leaflet dispensers for psy-ops missions as a “Psywarrior” over Vietnam. The flying hot ramp at the museum had easy access, and included the Army Fokker C-31A Golden Knights jump plane, the Czech L-39 Aero-Vodochody Albatrosses in Navy VX- 9 colors and in VFA-106 “Gladiators” colors from the Warrior Flight Team, the olive drab Douglas C-47 Skytrain “Second Chance” with “D8” on the nose and a big yellow “Z” on the tail, the Grumman TBM-3E Avenger “401-SL”, the silver T-6C Texan “Deb” with “TA-439”, the Curtis P-40 Warhawk “The Jackie C” with seven “Meatballs” on its nose, the North American AT-28D-5 “Trojan” in Vietnam colors, an L-39 in tan camouflage aggressor colors, the silver North American AT-6D-NT Texan “143-12” “Double Trouble” with a witch on a broom for nose art, the North American RB-25 Mitchell Bomber “Miss Hap”, the personal aircraft for General Hap Arnold in WW2, an L-39 in Czech colors and a Czech rondel; the B-17G “Yankee Lady”, the Republic A-10 Warthog with “OS” on the tail, from Osan AFB, Japan, USAF Pacific Air Force, the Grumman EA-6B Navy “Prowler” from VAQ-129 (hanger), the F-84E-15-RE Thunderflash from Lockbourne AFB, Ohio (hanger), another TBM-3 Grumman Avenger in light blue, a red WACO UPF7/PT-14 bi-plane and finally, another North American SNJ-5 with red bands. All the flying and static planes at Republic made for quite a mini-airshow and you didn’t even have to stand in the hot sun at Jones Beach. Maybe next year we’ll try the Beach just for the aerobatics. 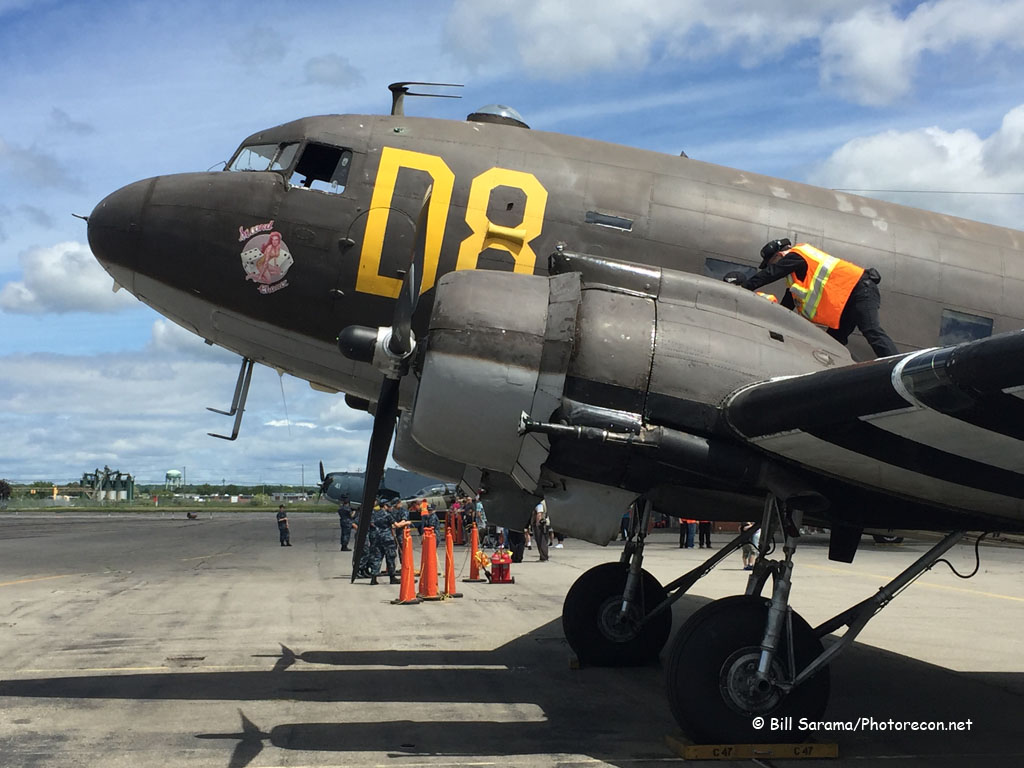 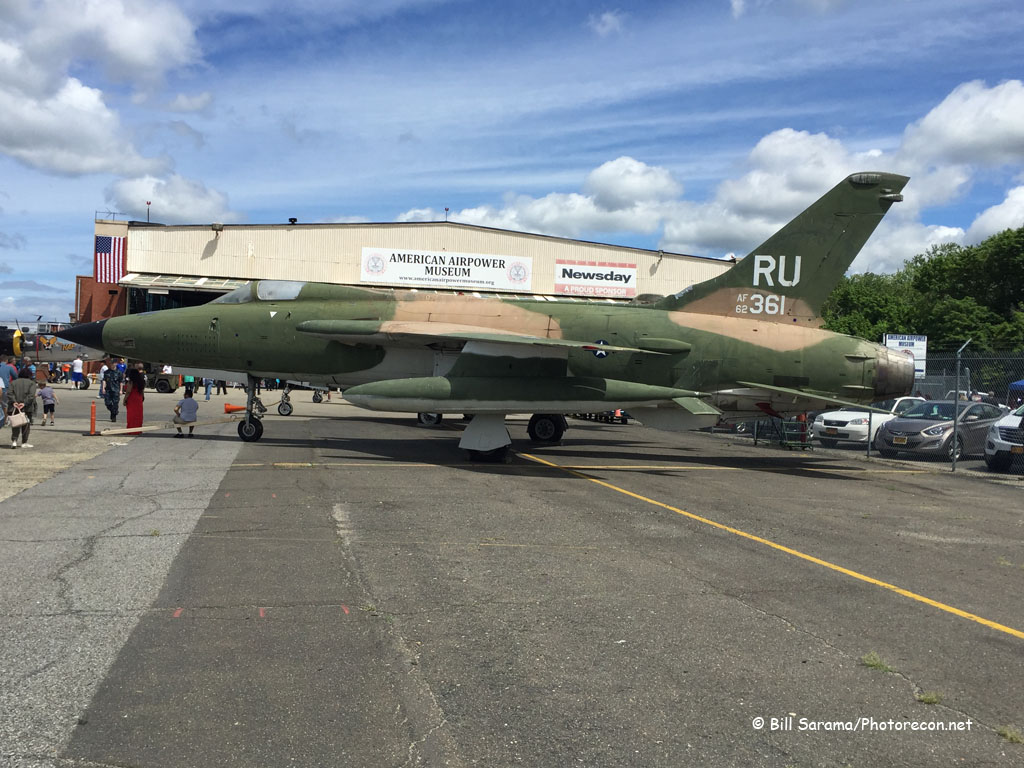 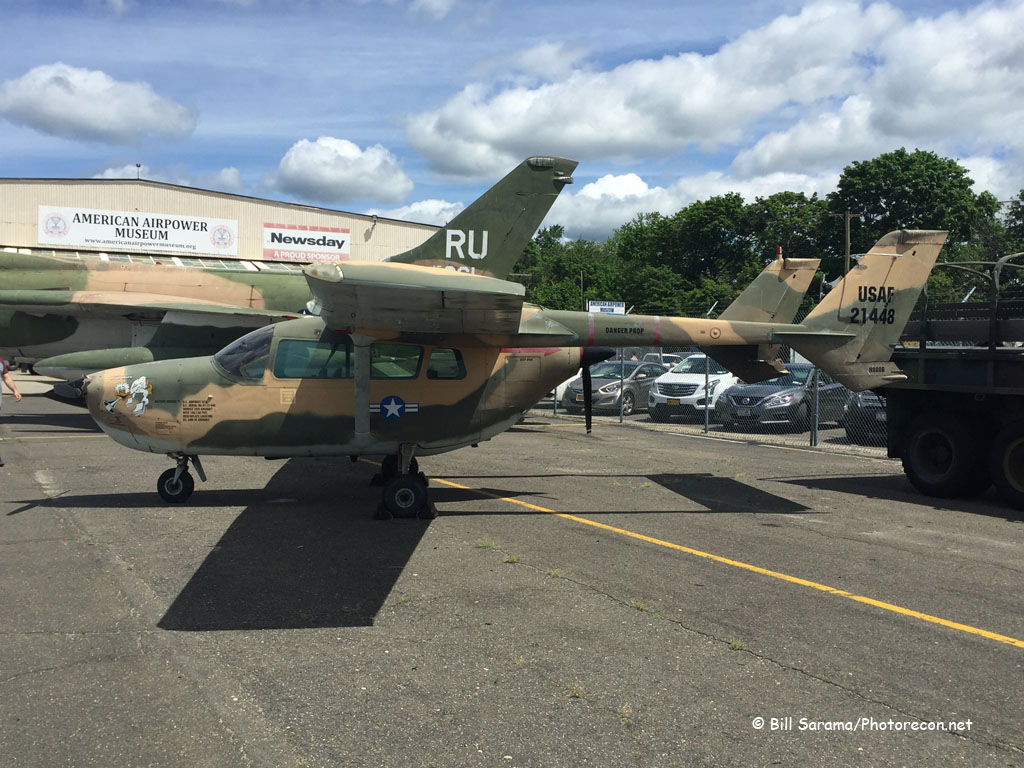 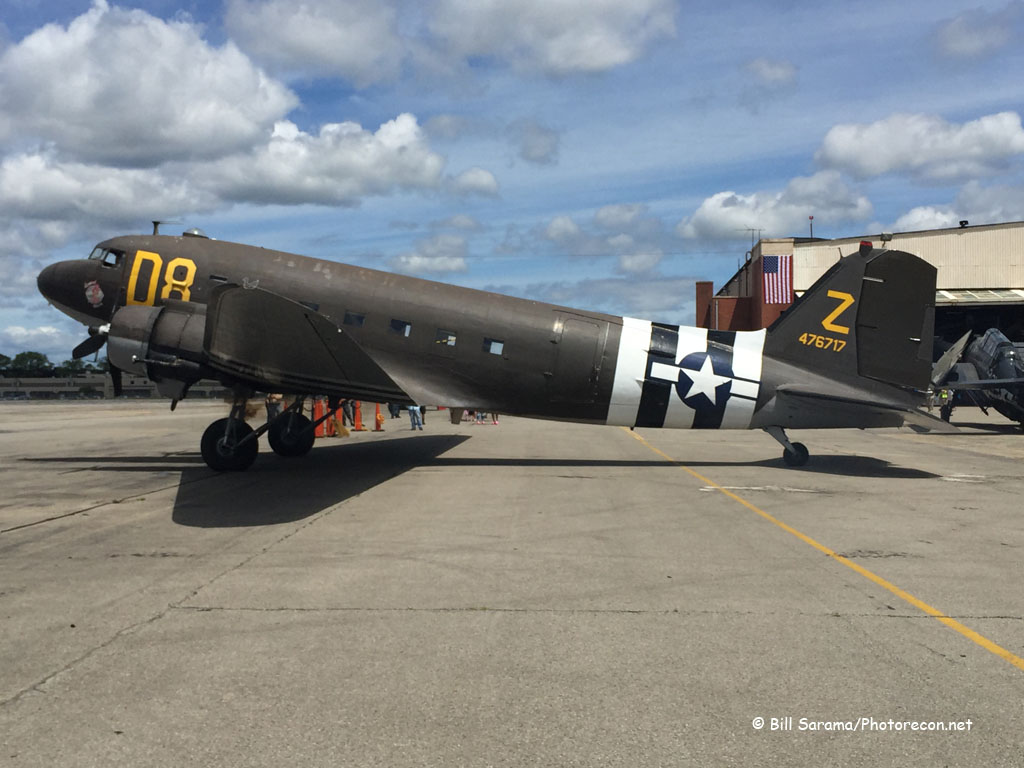 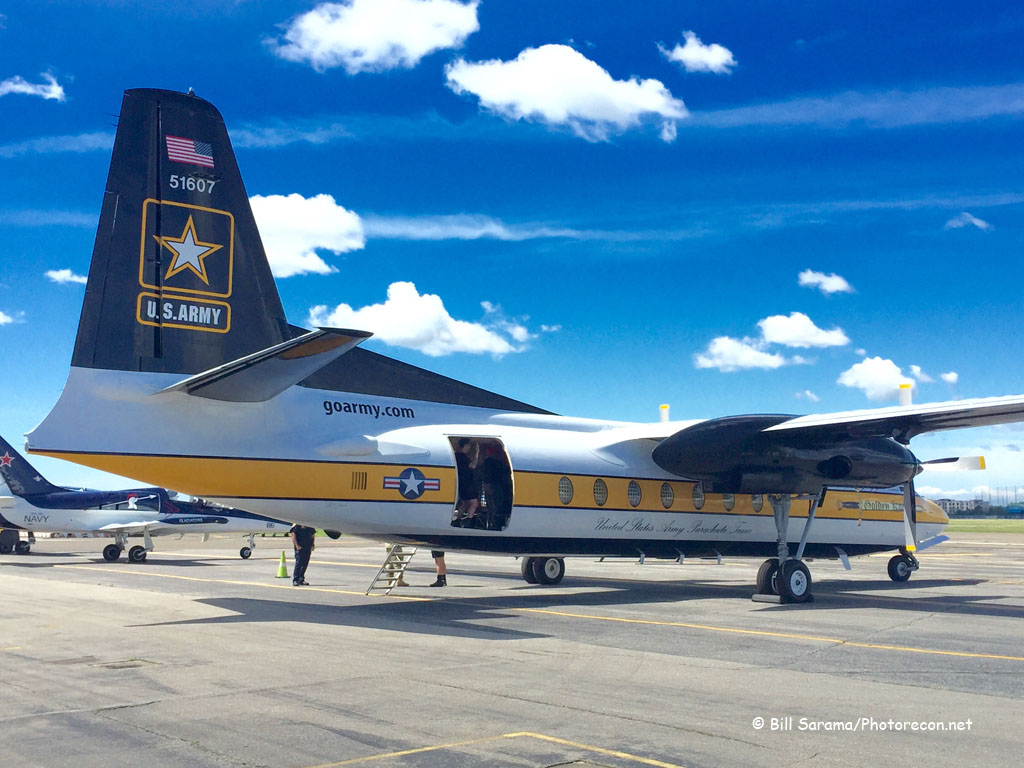 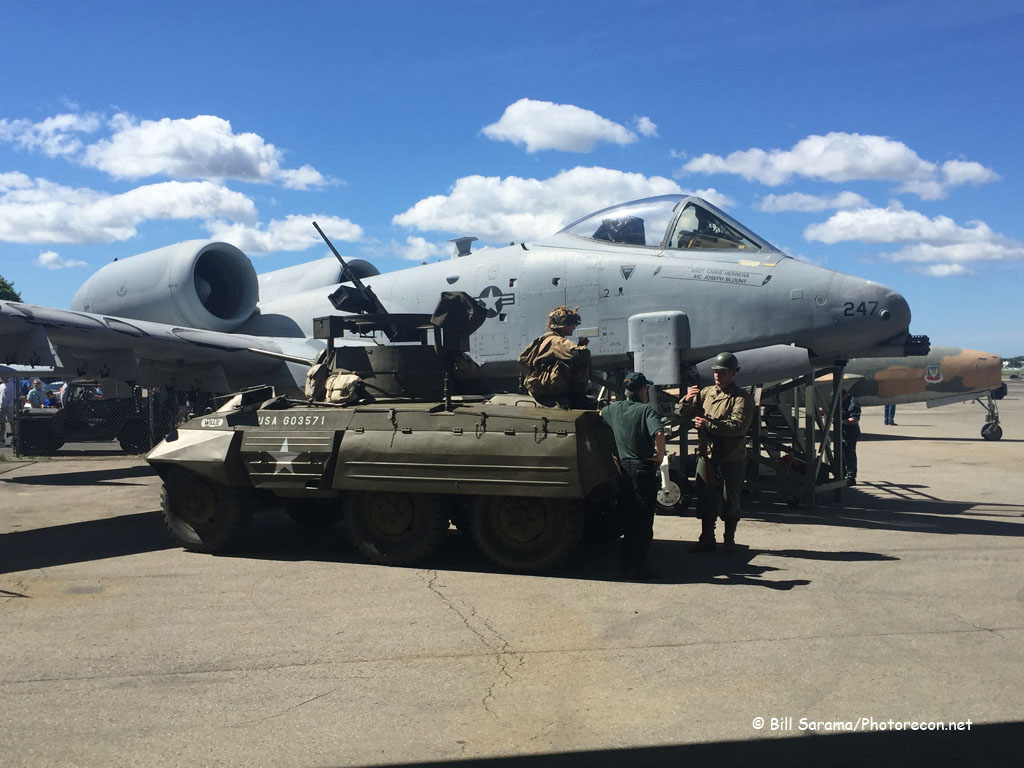 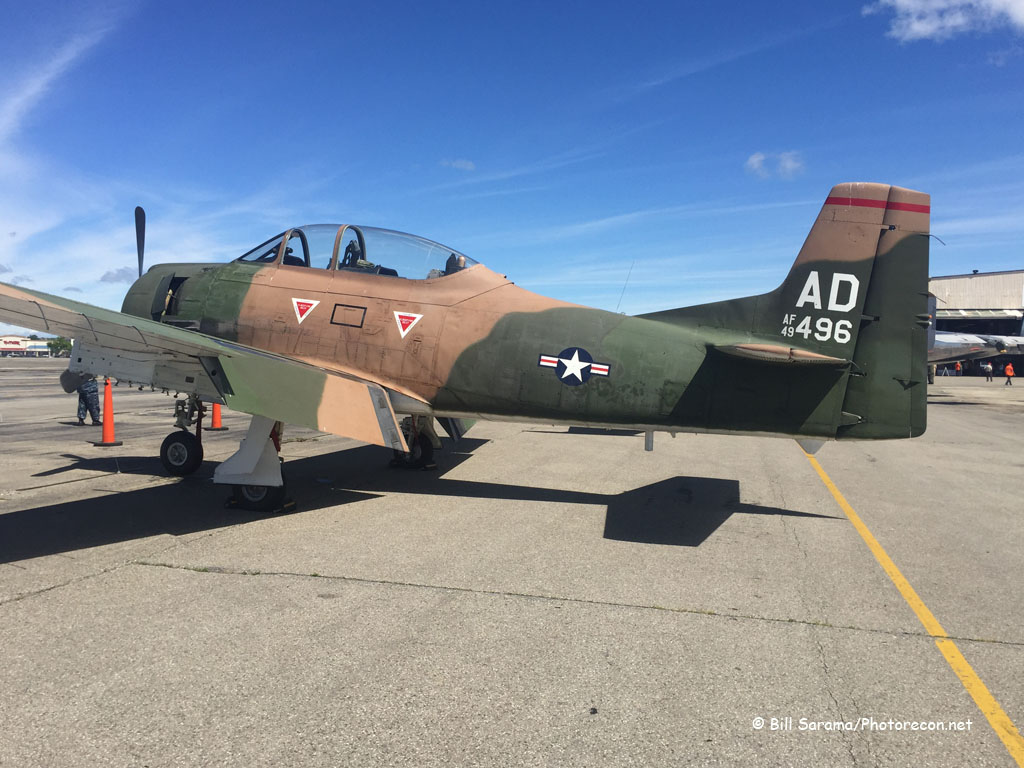 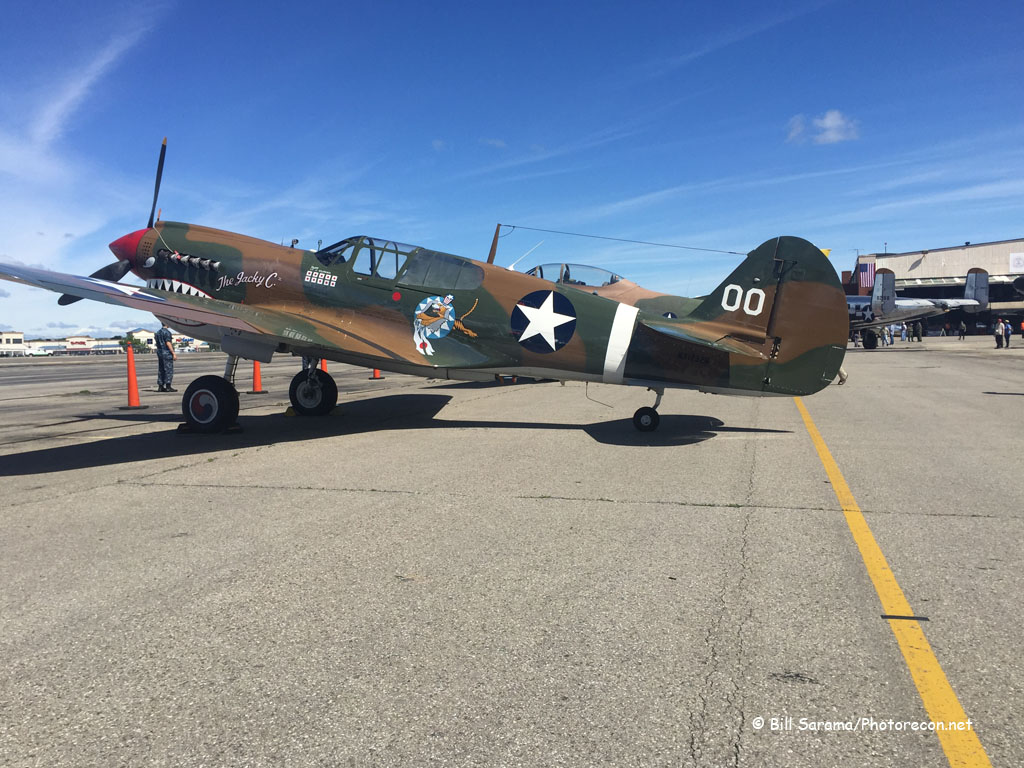 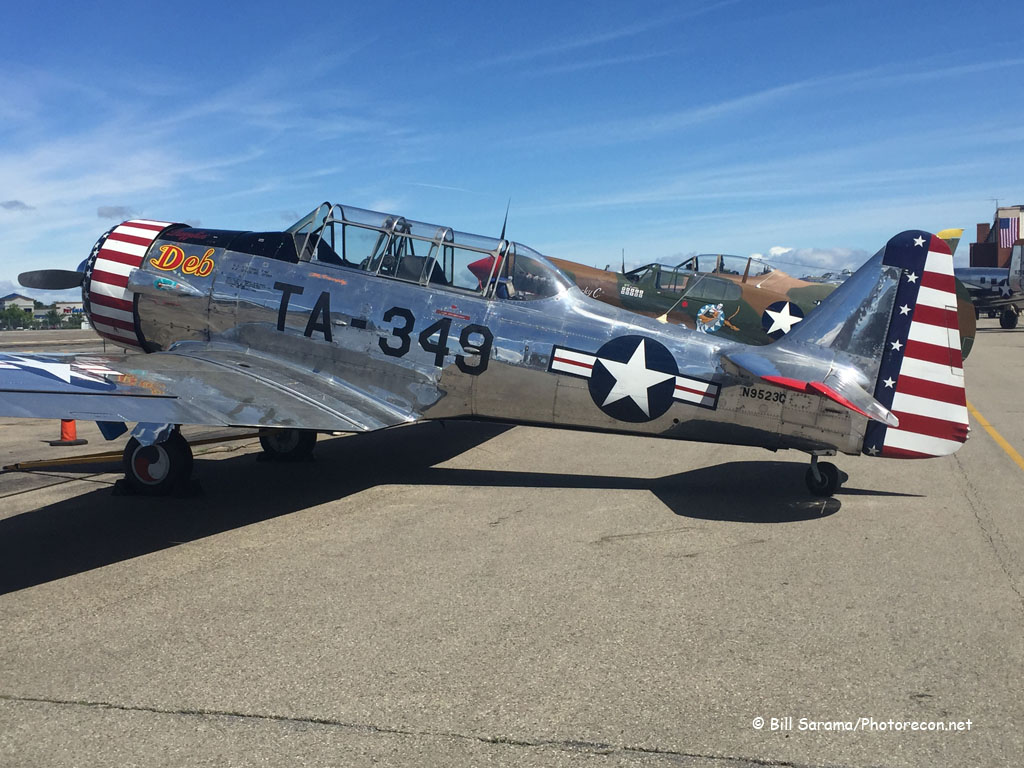 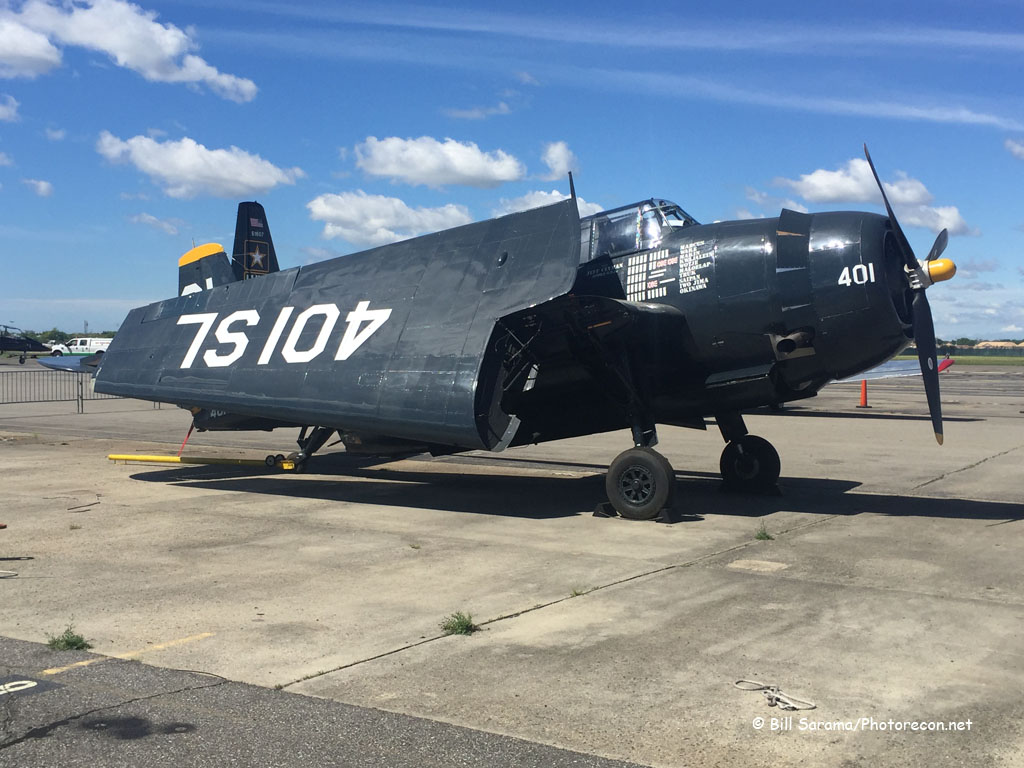 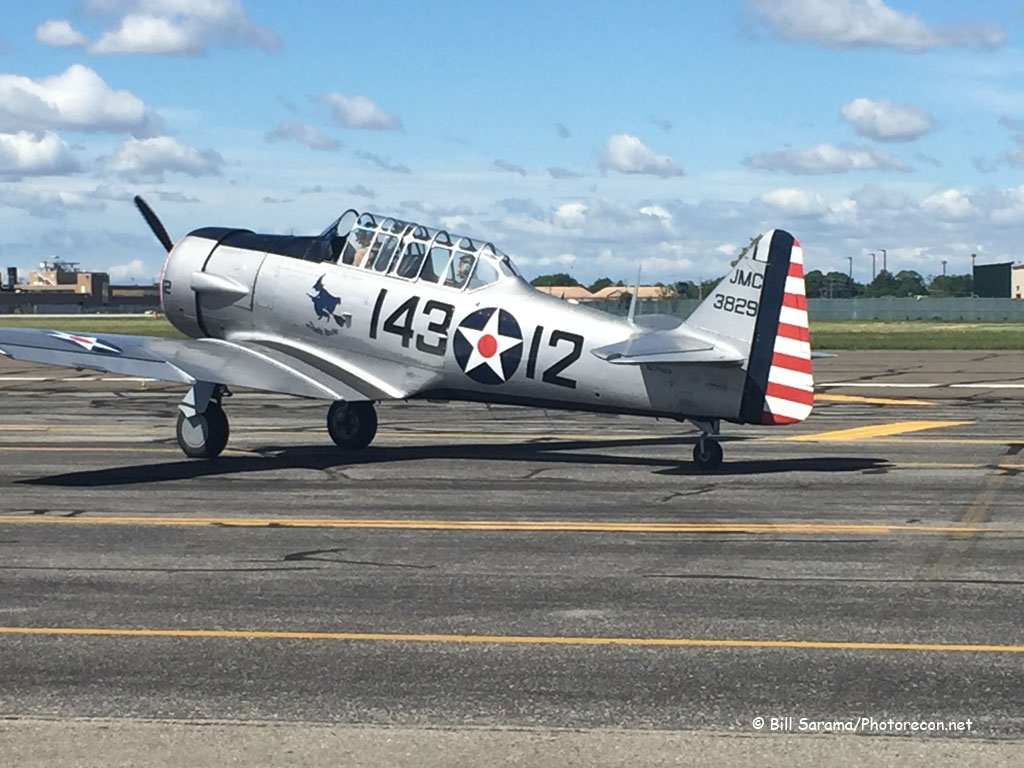 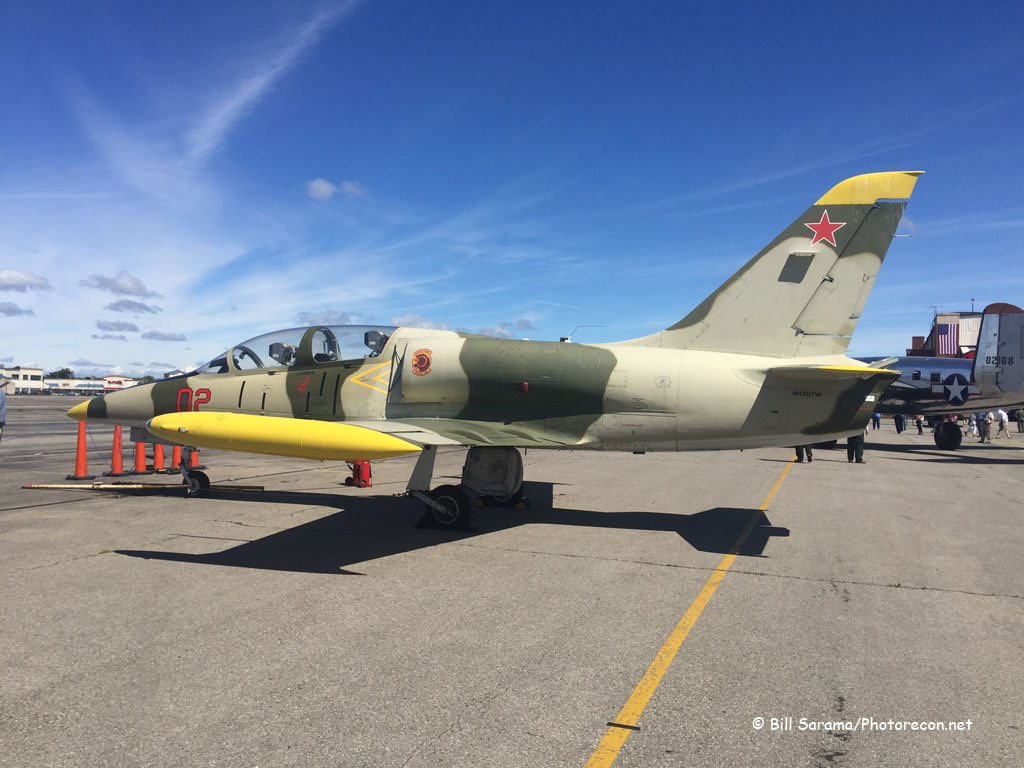 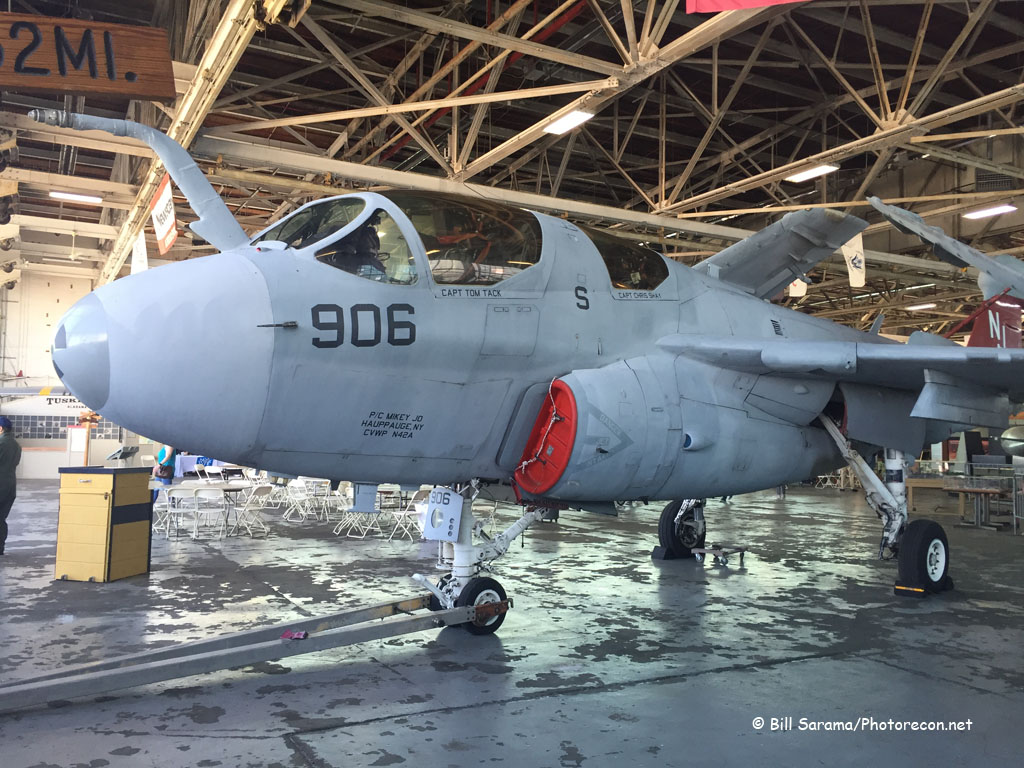 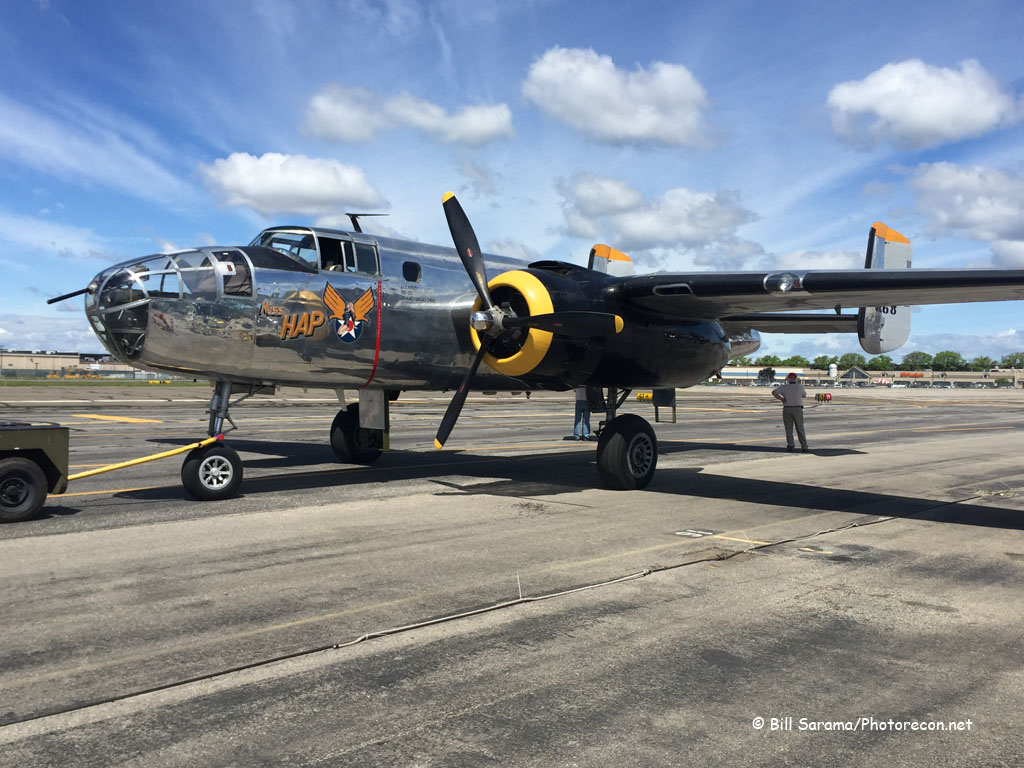 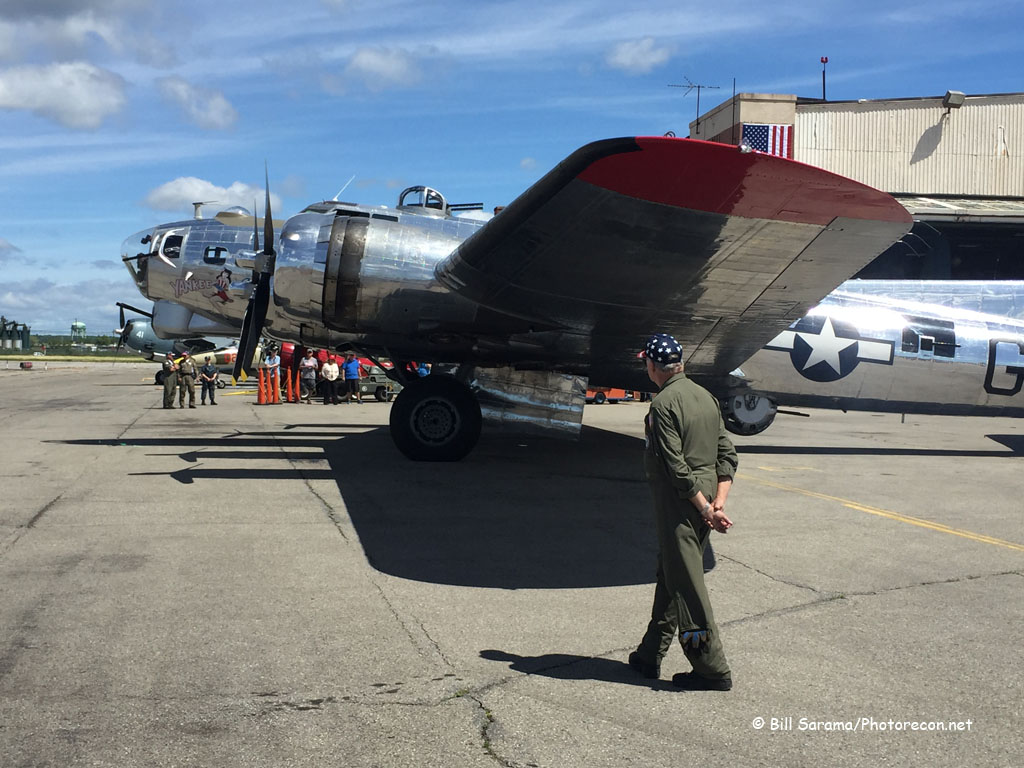