At the Valiant Air Command’s TICO Airshow this spring a new Corsair debuted.  The F4U-4 N713JT Bureau No. 97143 is owned by Jim Tobul of South Carolina and has been in the family for about 30 years.

This is an airframe that has a lot of interesting history behind it.  This airframe has been christened the “Korean War Hero” by the Tobul Family with good reason.  It was built in August 1945 and missed the end of WWII, but went on to serve in Korea.  This exact airframe was aboard the USS Boxer (CVN21) from June to October 1951 with VF884 on its second tour of duty.   It had previously served in Korea from December 1950 to May 1951 on the USS Valley Forge (CV45) with VF653 which was a Naval Reserve Squadron from Akron Ohio.  VF653 was commanded by Cook Cleland of Cleveland, Ohio.

Cook Cleland was a Naval Aviator who flew in the Battle of the Coral Sea and the Battle of the Philippine Sea in WWII.   Although he was a dive bomber pilot he was credited with 5 kills and became an “Ace”.  After the war, he went into air racing and won the 1947 and 1949 Thompson Trophy Races with the F2G Corsair.   Cook Cleland actually flew this airplane in combat in the Korean War.

The Corsair was acquired by Joe Tobul and his son Jim in 1981 and it underwent restoration in Pittsburgh.  That was a fitting place to restore the plane since it was flown by several pilots from Pittsburgh when it served with VF653.  The restoration took 10 years and it flew again in December 1991.

Joe Tobul flew the Corsair in airshows across the United States for many years sharing his airplane with anyone who came to see it.  Disaster struck in Columbia, South Carolina in November 2002.  Joe decided to bring the airshow to the troops and flew in formation with other airplanes to do a flyby at local VA Medical Center.   The Corsair caught on fire and crashed in a wooded area.  Joe didn’t survive the crash.

His son Jim restored the aircraft and its first public display was at TICO a show that Jim attended regularly in his AT-6.  It is a magnificent restoration and a beautiful airplane.  If you look closely at the names below the canopy, not only is Jim’s name there, but his father’s name is there too.  It’s a fitting memorial for his father.

The “Korean War Hero” is scheduled to appear at quite a few airshows this season on the east coast.  You can find its schedule at http://www.koreanwarhero.com.

You can reach the author at TNMark@Me.Com. 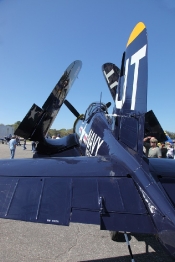